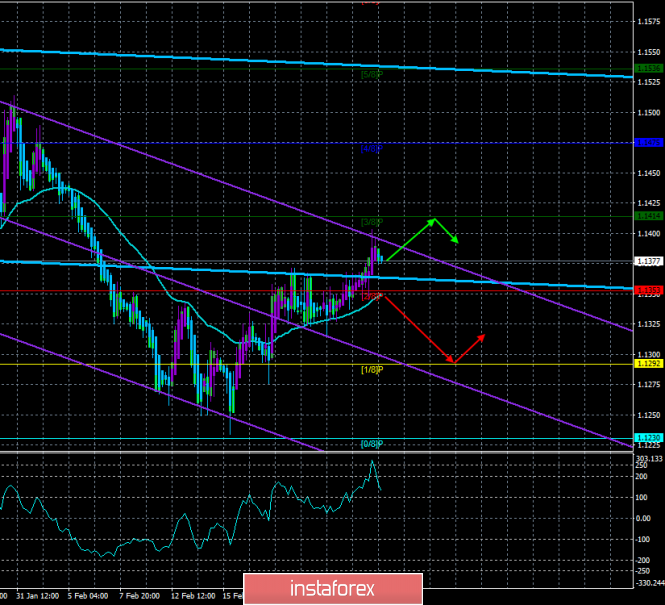 The currency pair EUR / USD on Wednesday, February 27, made a movement upwards, after which it could begin a downward correction. Evening performance of Jerome Powell in Congress can be called neutral. At least, he did not report anything of great importance and interest. Powell noted that he considers the prospects for the economy favorable, but he admits that over the past few months, the Fed has faced a number of "contradictory trends and signals." Since inflationary pressure remains restrained, all previous Fed measures are fully consistent with the "patient approach to changing the key rate." Also, the Fed chief focused the attention of Congress on several unresolved issues, which only add uncertainty to monetary policy, namely Brexit and trade negotiations. Powell also said that the consequences of the recent "shutdown" will be moderate, and the Fed managed to unload its balance sheet by about $ 500 billion. Today will be Powell's second congressional speech, as well as the publication of reports on durable goods orders in the United States. Thus, today traders will have something to turn their attention to. In technical terms, we now expect a correction to move, and the upward trend, though weak, remains on the instrument.

The EUR / USD currency pair may begin to be adjusted, as the Heikin Ashi indicator is warning now. Thus, it will be possible to open long positions after turning this indicator to the top with the target of 1.1414.

Short positions can be considered after fixing the price below the moving average. In this case, there is a possibility for the instrument to change to downward, and the first goal will be the level of 1.1292.