EUR/USD. 25th of February. Results of the day. New duties on Chinese imports will not be introduced 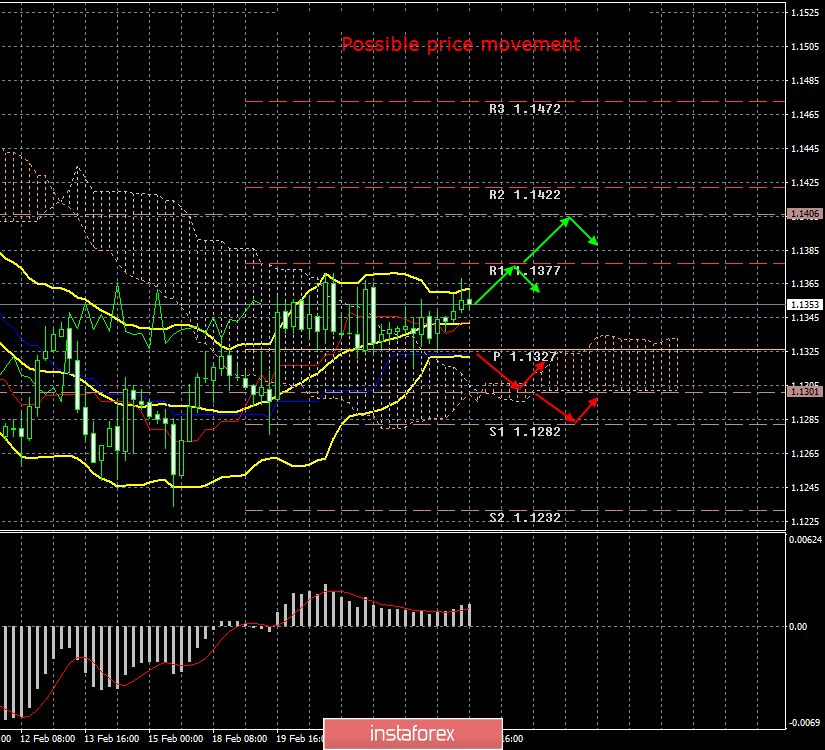 On Monday, February 25, the EUR/USD currency pair was moving up, however, looking at the volatility indicator values in the last three days, it becomes clear that there is a clear flat on the market. Bollinger bands are of the same opinion - they narrowed and turned sideways. During the first trading day of the week, the only information received at the disposal of traders was that "serious" progress was made in the negotiations between China and the United States; new duties on the import of Chinese goods would not be introduced on March 1. The parties also managed to achieve progress in matters of intellectual property, technology, agriculture, services and currencies. This was stated by Donald Trump in his Twitter account. However, as we can see, traders were not very interested in this information, and there was simply no other data. No important macroeconomic reports were published today either. What do we have in the end? The pair can continue to move with a low upward slope, until it receives any important data that will stir up the market. At the same time, the level of 1.1365 has already survived the pressure from traders. Thus, today, a rebound from the designated level is possible and downward movement within the lateral channel that was formed in recent days. A downward MACD indicator may also signal a downward movement.

The EUR/USD resumed the weakest upward movement. Formally, long positions with the target of 1.1377 (and further to 1.1406) are relevant now, but the entire upward movement could stop around 1.1365.

Sell orders are recommended to be considered no earlier than consolidation below the Kijun-Sen line, but even in this case, given the weak volatility, one cannot count on serious downward movement. Looking for strong fundamental data.