EUR/USD. 28th of February. Results of the day. The euro rose on the European trading session and fell on the US 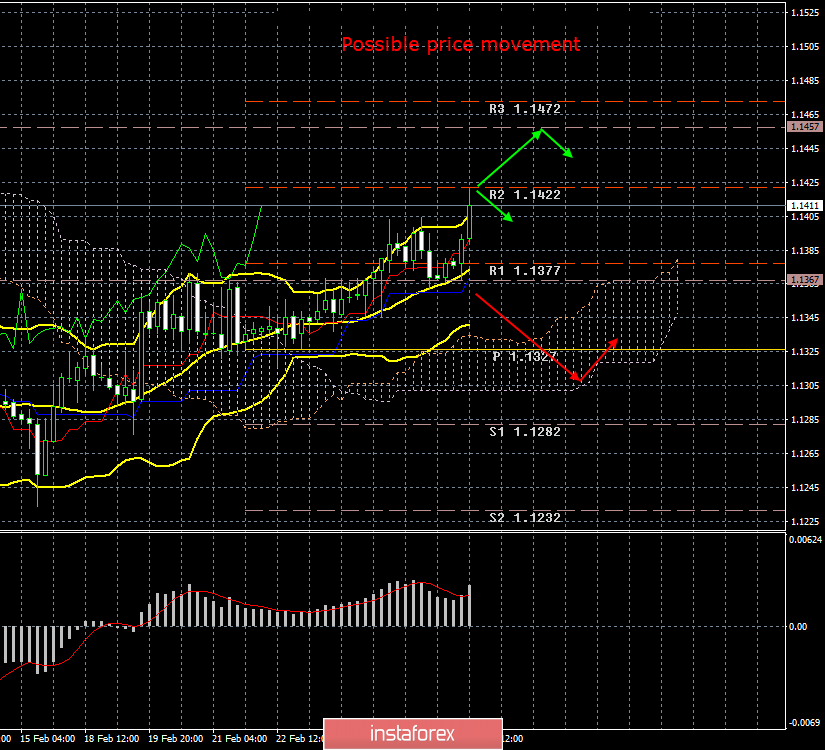 On Thursday, February 28, the EUR/USD currency pair resumed an upward movement after a small correction to the critical line. However, overall, instrument volatility remains low. In the first half of the day, there were no significant economic news in the European Union and the United States. But literally just half an hour ago data on US GDP for the fourth quarter was published, however, only at a preliminary value, and it turned out that the real value significantly exceeded market expectations (2.6% y/y versus 2.3%). Thus, now the US currency has received slight support. But, as we have said, all movements of the pair are in the daily range of 40-50 points, no more. Thus, we assess that the current state of the market is unfavorable for active trading. The pair is moving, but very weakly, there is practically no news, in such conditions, it is not necessary to expect a movement of 80-100 points in one direction without rollbacks and corrections. From a technical point of view, a new round of downward correction to the Kijun-Sen line is now possible. Below this line, the pair can not gain a foothold from February 18, that is 10 days. Therefore, the prospects for a weak upward movement remain, but it is still not too attractive for testing. The recent meeting between Donald Trump and Kim Jong-un has been concluded in Vietnam. It ended in nothing: the United States abandoned all sanctions against the DPRK, as the proposal of the North Korean leader did not suit Trump. This news did not have much impact on the dollar.

The EUR/USD pair may start a new round of correction. If the MACD indicator turns down, it will be a specific signal for a correction. As before, formally, longs with a target of 1.1422 are now relevant, but weak volatility plays against active trading.

It is recommended to consider sell orders not earlier than consolidation below the Kijun-sen line, but even in this case, given the weak volatility, the downward movement can be extremely weak. Therefore, it is recommended to work in small lots at the moment or expect an increase in volatility.