EUR/USD: the dollar allowed itself a correction, the euro is gaining strength

Today, the euro-dollar pair again tested the 14th figure against the backdrop of German inflation, but at the beginning of the US session the price went back home. Buyers are unable to gain a foothold above the mark of 1.1401, although this is a prerequisite for further growth to the main resistance level of 1.1440 (the upper Bollinger Bands line coinciding with the upper boundary of the Kumo cloud on D1). Bulls of EUR/USD for the third day attacked an irresistible mark, however, each time there is one or another argument that returns the pair to the area of the 13th figure. If yesterday geopolitical tensions were on the agenda in the light of the armed clashes between India and Pakistan, today, US macroeconomic data came to the fore.

However, we can not say that the key indicator of the growth of the US economy was impressed with its dynamics. On the contrary, in the fourth quarter of last year, US GDP slowed again, however, the pace of this slowdown was slightly better than experts' expectations. Thus, if in the second quarter of 2018, the country's GDP reached its peak of 4.2%, the third quarter showed an increase of only 3.4%, and the fourth – up to 2.6%. The negative dynamics is visible to the naked eye, but today's results should have been even lower – at the level of 2.2%. 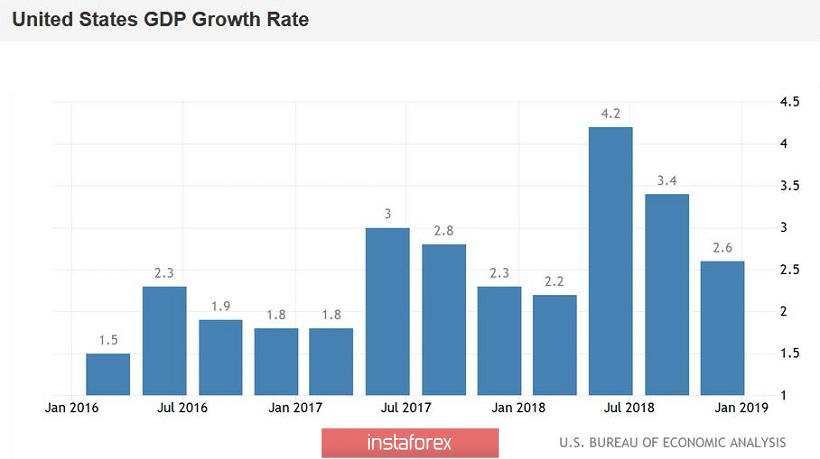 Dollar bulls have tried to use a slower fall in the indicator in their favor – and they succeeded against many pairs. The dollar index again entered the area of 96 points, although its growth is very phlegmatic. An additional "bonus" from today's release was the dynamics of the price index of GDP. This indicator also came out slightly better than expected (1.8% instead of 1.7%), although in fact the index remained at the level of the third quarter.

Thus, the reaction of dollar bulls is rather emotional. De facto, today's data has once again showed a slowdown in the US economy - moreover, the downward movement has acquired a strong trend, justifying the fears of the Federal Reserve members. In this context, it does not matter that the published figures turned out to be a few tenths of a percent higher than projected. What is important here is that alarming signals of an indirect nature are beginning to take on a real form with all the ensuing consequences. For example, the "dovish" wing of the Fed had additional arguments in favor of a wait-and-see position. After all, according to the minutes of the last meeting of the Federal Reserve, the regulator will raise the rate this year only if inflation is fixed above the target level. Given the dynamics of the GDP price index, we should not expect an inflation spurt in the foreseeable future.

Nevertheless, bears of the EUR/USD pair decided to take advantage of the situation, especially against the background of the Chicago PMI, which peaked from December of the previous year. Thus, the business activity index in Illinois jumped to 64.7 points in February, contrary to forecasts of growth to 57.5. For comparison: this indicator came out at around 56.7 last month. The structure of this indicator suggests that the components of new orders, production and employment grew to their highest levels. 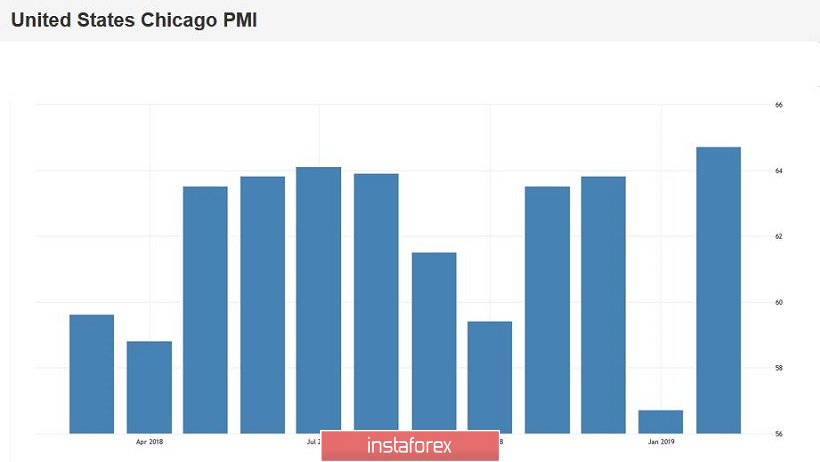 And if the US macroeconomic statistics is very ambiguous, the geopolitical situation in the world on the contrary – provides only support to the dollar. The escalation of the conflict between India and Pakistan has a background effect on the foreign exchange market. Risk appetite has decreased, while anti-risk instruments are gradually gaining momentum. In addition to this fundamental factor, the situation with Brexit puts pressure on the euro/dollar pair.

Despite the general belief that the British Parliament will vote to postpone the country's exit from the EU, the comments of some officials and politicians make traders nervous. For example, today, the head of the EU negotiating group Michel Barnier expressed doubts about the need to extend the transition period. In his opinion, the British will only postpone the problem for a few months, hoping to convince Brussels to reconsider the deal. However, once again, he reminded everyone that Europe's position is unwavering: the EU will not revise the deal and/or make any changes to it. This statement puts pressure on both the pound and the euro.

Thus, further dynamics for the EUR/USD pair depends on the external fundamental background. The US macroeconomic data published today cannot reverse the situation, but the world is closely following the Indo-Pakistan conflict. If the parties do sit down at the negotiating table, bulls of the pair will again attempt to attack the 14th figure. Otherwise, the price will return at least to the mark of 1.1345 (at this price point, the Bollinger Bands middle line coincides with the Tenkan-sen line on the daily chart), and then to the bottom of the 13th figure.