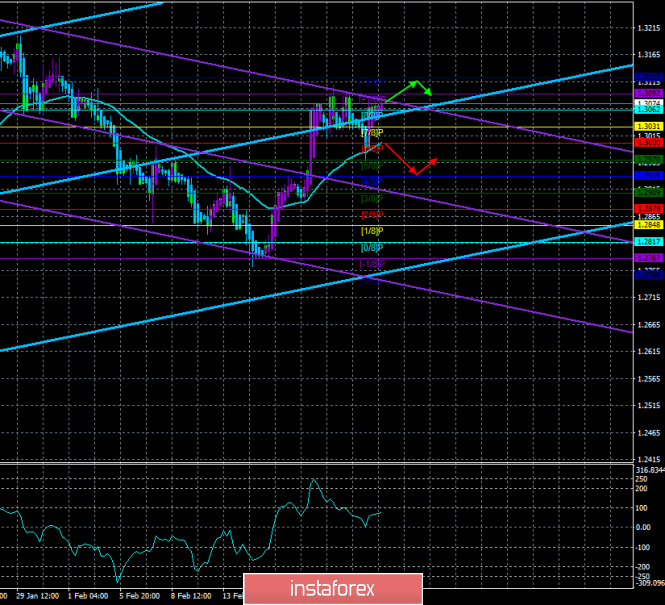 On Monday, February 25, the currency pair GBP / USD resumed its upward movement after a perfect correction to the moving average. However, at the moment, the pair failed to overcome previous local maxima, so the continuation of the upward movement is now in question. During the weekend, it became known that Teresa May once again postponed the date of the vote on Brexit for a term--no later than March 12. According to her, "positive" negotiations with Brexit will continue, and, accordingly, now there is no reason to vote for her "plan B". Well, once again, we note that the whole process may be entering the home stretch, according to Theresa May. Unfortunately, her words about the "positiveness" of the negotiations could mean nothing in practice. The EU's concessions, if at all, will be so minor in the negotiations that the British Parliament will again block a deal with the EU and then either the "hard" Brexit, or the transfer date of exit from the EU. Mark Carney will be speaking in the UK today. He regularly updates the market and the public about the threats which might affect the Brexit even more. Perhaps, we will hear something similar today. From a technical point of view, we are still expecting a downward movement, but in order to work it out, we recommend waiting for the moving average to be overcome.

The pair GBP / USD is trying to resume an uptrend. Now formally are relevant longs with a target of 1.3123. However, there is reason to assume a downward reversal and the formation of a downtrend, so you should be careful with longs.

Shorts will again become relevant after the price is fixed back below the moving average line. The targets in this case will be the levels of 1.2939 and 1.2909.

The senior linear regression channel is the blue lines of unidirectional movement.

The junior linear channel is the purple lines of unidirectional movement.