Gold got rid of the ballast

Rebounding from support near two-week lows, gold quickly recovered and rushed to attack. The external background for the precious metal remains favorable, and the short-term correction is due to a partial profit-taking after a long rally and the statement of US trade representative Robert Lighthizer that there are still many issues in relations with China and the deal has not yet been concluded. Let me remind you that the conflict between the two largest economies in the world faithfully served the US dollar in 2018.

Despite the fact that gold is considered a safe haven asset and a hedge against inflation, it is growing amid the recovery of US stock indices and the slowdown in consumer prices in the United States. In fact, one of the main drivers of the S&P 500 rally is the reduction in the cost of borrowing in real terms. The negative correlation between the stock index and the yield of US Treasury bonds reached its highest levels since 2012, due to the Federal Reserve's desire to pause the process of normalizing monetary policy. 7 years ago, the central bank announced another round of quantitative easing. 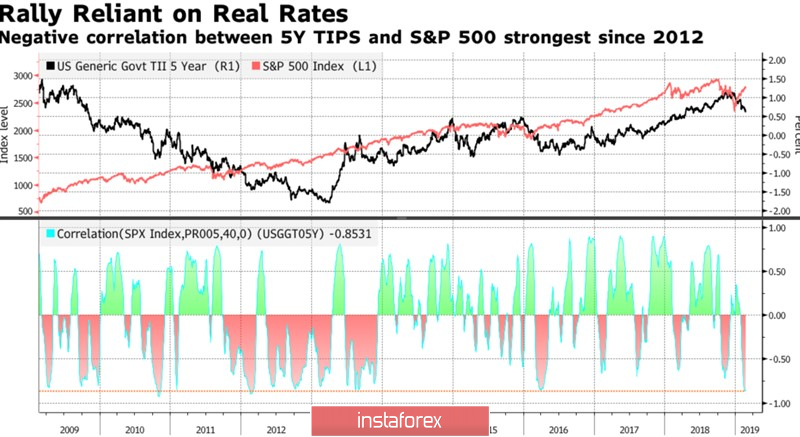 However, the fall in real rates of the US debt market creates favorable conditions not only for the shares, but also for many assets of the commodity market, including gold, oil and copper. Precious metal does not bring interest income to its holders, so it cannot compete with bonds if their yield increases. Currently, it is falling, and investors are actively diversifying their portfolios in favor of XAU/USD.

The current consolidation of gold is due not only to profit taking by speculators after 9% of the winter rally, but also to the reluctance of the derivatives market to increase the chances of reducing the Federal funds rate in 2019. CME derivatives believe in the end of the normalization cycle, however, in order for them to adopt the idea of easing the Fed's monetary policy, further deterioration in macroeconomic statistics across the United States is necessary. Theoretically, it is very likely, because the traditionally bad weather for this time in the United States, the fading effect of the fiscal stimulus, the negative impact of the dollar's revaluation on exports and GDP, as well as the weakening of external demand due to trade wars draw moderately pessimistic prospects for US indicators. At least in the short-term investment horizon.

The dollar can recover in the medium-term. The euphoria about the de-escalation of the trade conflict has driven the S&P 500 too high. The rally does not have a solid foundation in the form of improved macroeconomic statistics. According to 65% of more than 90 experts from Reuters, US stock indexes are in danger of falling in the second half of this year. This will have a positive effect on safe-haven assets, including the US dollar.

Technically, if bulls on gold manage to keep quotes above $1,321 per ounce, the risks of continuing the rally in the direction of the target by 361.8% on the AB=CD pattern will increase. 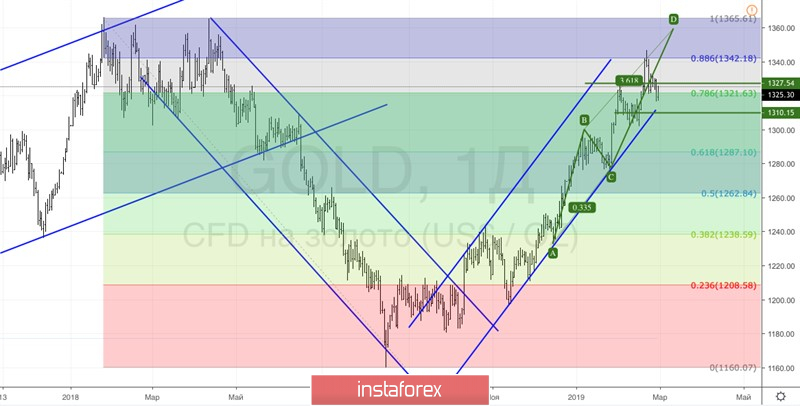