Intraday technical levels and trading recommendations for EUR/USD for February 28, 2019 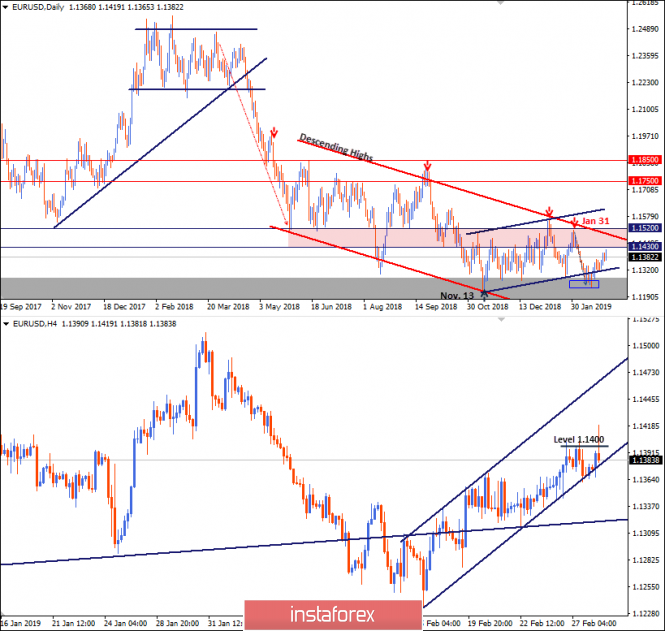 On November 13, the EUR/USD demonstrated recent bullish recovery around 1.1220-1.1250 where the current bullish movement above the depicted short-term bullish channel (In BLUE) was initiated.

Bullish fixation above 1.1430 was needed to enhance further bullish movement towards 1.1520. However, the market has been demonstrating obvious bearish rejection around 1.1430 few times so far.

The EUR/USD pair has lost its bullish momentum since January 31 when a bearish engulfing candlestick was demonstrated around 1.1514 where another descending high was established then.

This allowed the current bearish movement to occur towards 1.1300-1.1270 where the lower limit of the depicted DAILY channel came to meet the pair.

Since February 20, the EUR/USD pair has been demonstrating weak bullish recovery with sideway consolidations around the depicted price zone (1.1300-1.1270).

This week, significant bullish recovery has emerged around the lower limit of the depicted H4 channel on Tuesday. However, Today, the pair has failed to fixate above 1.1400 with early signs of bearish rejection on the H4 chart.

This may indicate a high probability of a bearish reversal ONLY IF bearish breakdown below 1.1360 is achieved on H4 chart.

Please note that a bearish flag pattern may become confirmed if bearish persistence below 1.1250 is achieved on the daily basis. Pattern target is projected towards 1.1000.