More than 20% of the Brent and WTI rallies proved enough for Donald Trump to show his displeasure. He has repeatedly complained that high oil prices are reaching the pockets of ordinary Americans, the US president said on Twitter that the current value of black gold is too high, and urged OPEC to relax. It seems that the owner of the White House firmly believes that the main cause of the rally of the main varieties was the cartel's decision to reduce production 1.2 million b/d. I notice a speck in another's eye, I don't see a log in my own! But what about the sanctions against Iran and Venezuela? But what about the breakthrough in the negotiations between Washington and Beijing, which strengthened the global risk appetite and the demand for oil?

Last year, Trump twice appealed to OPEC with a request not to raise prices artificially. In the summer, the cartel, under pressure because of the murder of an American journalist, backed off, which immediately affected the economy of the Middle East. In the fall, the US president's appeals were ignored, however, a grace period in respect for deliveries of black gold from Iran under sanctions allowed Brent and WTI bears to lower futures quotes by 35%. Now Americans have no such trump card. More precisely, the period can be extended, but the cartel and its allies are not asleep. In addition, the bulls have Venezuela on hand and a potential improvement in global demand amid rising hopes of ending trade wars. Trump was in a rather unpleasant situation: he wants the stock indices to grow and oil to fall. Quite an absurd desire in terms of intermarket analysis.

Yes, oil sellers have strong arguments in the form of growth in US production and exports, as well as the 6th increase in reserves in the week to February 22 (according to forecasts by experts at Bloomberg, the figure will rise by 3 million barrels). Oil companies from the United States use the increase in prices for black gold, actively increase production and at the same time hedge risks. Supply expands faster than demand, which is a "bearish" factor for WTI.

Dynamics of oil and US reserves

On the other hand, the sanctions against Venezuela make Caracas puzzle over who it would sell 8.36 million barrels of oil worth more than $1.5 billion, while Trump's statements about too high prices are reminiscent of calls from a man who had hid in order to save himself against the hands of other people. If you are entering into an agreement with China, you want the Federal Reserve to stop the cycle of monetary policy normalization, and you put pressure on Venezuela and Iran, then be prepared that the growth of global risk appetite and the reduction of production will push the quotes of Brent and WTI higher. According to Goldman Sachs, the price of black gold may increase by another 13% of the current levels, but this rally is likely to be short-term.

Technically, the bulls in the North sea variety did not reach the level of 50% of the CD wave of the Shark pattern. At the same time, their inability to keep quotes above $64.1 per barrel will be a sign of weakness and will allow the bears to develop an attack. 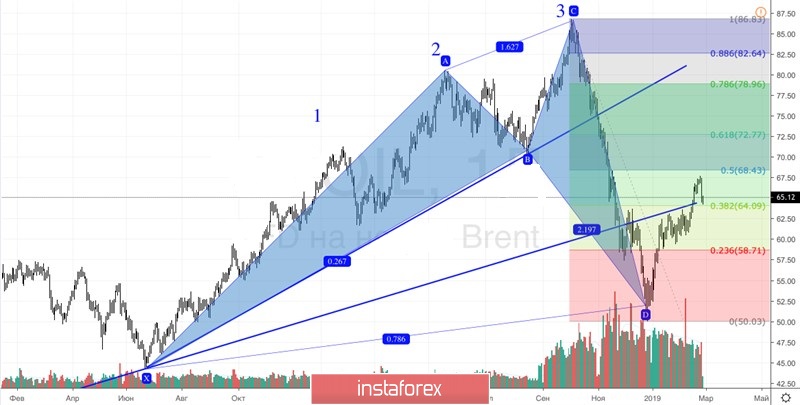