Wave analysis of GBP / USD for February 26. The pound continues to grow, risking to break the downward trend 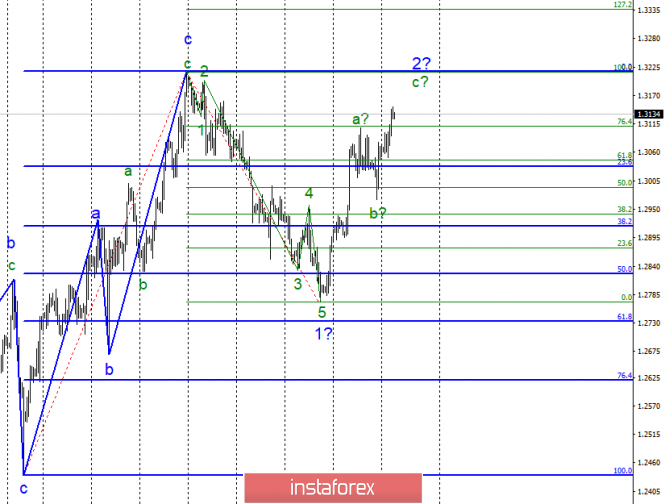 On February 25, the GBP / USD pair gained about 25 basis points, however, this was enough to exceed the maximum of the assumed wave 2. Thus, the entire wave 2 takes an elongated form and shows readiness to continue its construction. The internal wave structure of this wave took the form of a three-wave. However, the maximum goal of this wave cannot be higher than 100.0% Fibonacci. Going beyond this level will require new adjustments for the current wave marking. While small chances for the resumption of decline remain. The news background is now controversial. There is no positive news on Brexit, unless, of course, the positive postponement of the Brexit period from 2 months to 2 years is considered positive.

The objectives for the option with purchases:

The objectives for the option with sales:

The wave pattern still assumes the construction of a downward wave, however, after yesterday's breakthrough of the previous maximum, the chances for this have decreased significantly. Thus, now I recommend to wait for a new signal about the completion of the rising wave 2 and sell the pair with targets located near the calculated levels of 1.2826 and 1.2734, which equates to 50.0% and 61.8% Fibonacci. Particular attention is paid to any reports on the topic Brexit.