AUD/USD: The aussie dives down, but there is strong support ahead

Yesterday, the Australian dollar showed certain optimism, "inspired" by the results of the March meeting of the RBA. The regulator took a cautiously optimistic stance, focusing on the positive aspects of the Australian macroeconomic reports. Contrary to the fears of many experts, the central bank did not discuss the issue of reducing the interest rate, leaving some hope for the preservation of the status quo. But today, market mood regarding the prospects of the Australian currency has changed dramatically: published data on GDP growth in Australia suggests that the option of easing monetary policy can not be dismissed. Moreover, according to a number of currency strategists, such a scenario should be considered as one of the main ones.

Data on the growth of the Australian economy was disappointing. What is alarming is not just the fact that the country's GDP slowed down in the fourth quarter of last year - it is a persistent trend towards a decrease in the key indicator. Thus, if in the first quarter of 2018, Australia's GDP was at the level of 1.1% (quarterly), in the second quarter it decreased to 0.9%, in the third – to 0.3%, and finally in the fourth – to 0.2%. The same dynamics is observed in annual terms of the indicator: I quarter – 3.2%, II – 3.1%, III – 2.7% and IV – 2.3%. Today's release was not only worse than forecasts, but it also put a certain anti-record. For example, on a quarterly basis, the indicator showed the weakest growth dynamics since the third quarter of 2016. 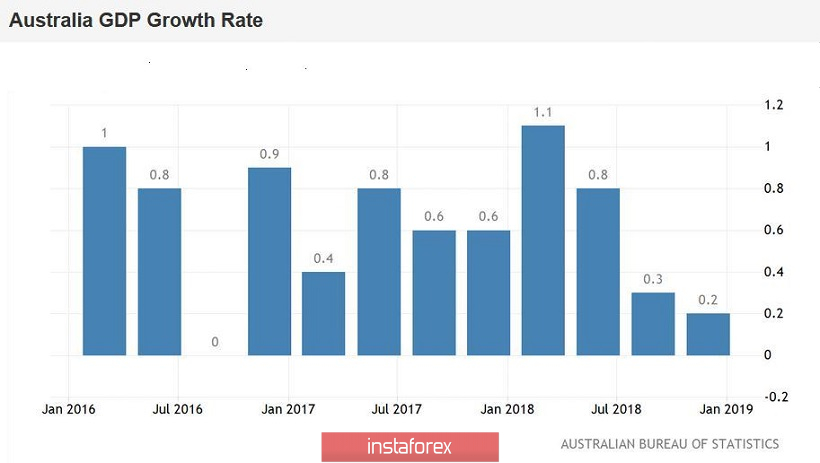 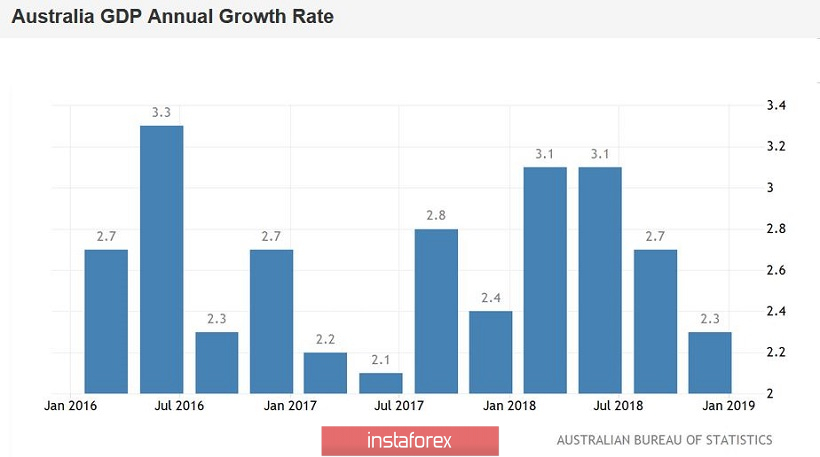 It is worth recalling that at its January meeting, the Reserve Bank of Australia downwardly revised its forecast for economic growth this year - from 3.5% to 3%. However, the figures published today suggest that the RBA may return to this issue in the future, reducing the growth forecast to at least 2.8%. Extremely weak indicators for the fourth quarter cast doubt on the sustainability of the country's economic growth and, consequently, increases the likelihood of a response from the Australian regulator. As I mentioned above, some currency strategists warn their clients about the implementation of such a scenario.

So, in late February, experts from Westpac (one of the largest banks in Australia, included in the "big four" banks of the country) surprised traders with the fact that they had made a double RBA rate cut before the end of this year. At the same time, economists of this bank, at the beginning of the year, claimed that the regulator would leave the rate unchanged until the end of 2020. Such a sharp turn had some pressure on the Australian dollar, which was then offset by good data on the Australian labor market and neutral results of the March meeting.

Nevertheless, Westpac did not abandon its "dovish" forecast: moreover, today this opinion was supported by two more conglomerates - JPMorgan and Macquarie Bank. Analysts of these banks said that the Australian regulator will not be able to ignore the further slowdown in the economy, while there are no prerequisites for changing the situation at the moment, especially against the background of the slowdown in the PRC economy. Therefore, the RBA will have no other choice but to lower the interest rate - at least once before the end of this year. The opinion of several large banks is shared by many experts, who voiced their point of view after the release of disappointing data.

According to more restrained forecasts, the RBA will still hold a wait-and-see position, but if there are no clear and strong signals about economic recovery in the coming months, then the central bank will still lower the rate - especially if economists worsen the GDP growth forecast for this year to 2.6% .

After such an unexpected reversal in the market's general sentiment, the Australian dollar was under considerable pressure. Paired with the US dollar, the aussie is heading to the main support level of 0.70. This mark is a "price stronghold", which is difficult to break through, but even more difficult - to consolidate in the area of 69-68 figures. If you look at the weekly and monthly charts, you can see that the pair was under the 70th mark only in 2016 for the last time in a long time. After that, the bears made impulsive attempts to break through, but the price quickly returned to its usual niche.

Therefore, despite the negative fundamental background for the aussie, short positions in the AUD/USD pair currently appear risky, with the price now in the area of 0.7030, that is very close to the key level of support. In this case, it is advisable to observe the behavior of the pair at the bottom of the 70th figure. If the bearish momentum fades, then a corrective pullback will probably follow (approximately to 0.7080, that is, to the upper boundary of the Kumo cloud on D1), which, however, does not cancel the overall downward trend for the pair.

The material has been provided by InstaForex Company - www.instaforex.com
AUD/USD: The aussie dives down but there is strong support ahead