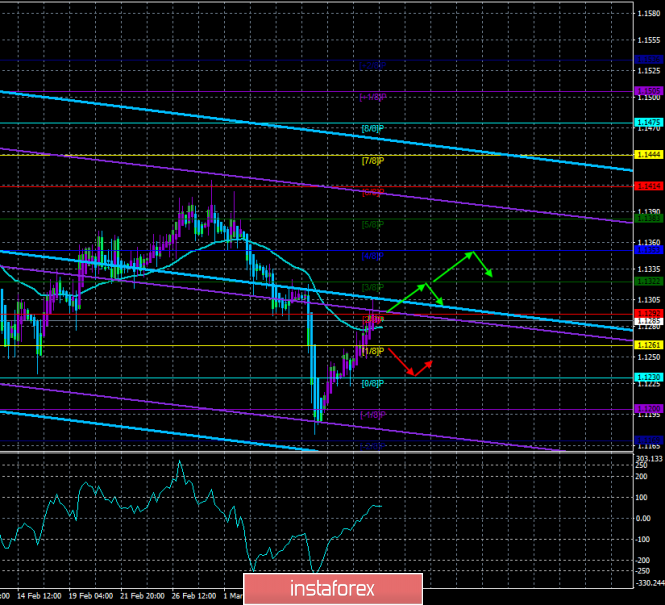 The EUR / USD currency pair on Wednesday, March 13, continues a slight, but almost recoilless, upward movement and has overcome the moving. As we have said several times this week, all the attention of market participants is still riveted on the pound sterling, or rather on the events taking place in the British Parliament. For the euro, trading is sluggish and inactive. Reports on inflation were published in the States yesterday, but they did not have a particular impact on the pair, although they may have helped it grow a little more. Today in the European Union, a secondary report on industrial production in January will be published. And in the States, there will be several reports on orders for durable and capital goods. American reports have a greater degree of significance, so the main movements can take place in the American trading session. What kind of movements will be made clear after the release of these reports? Euro currency in the past few days have recovered after overcoming the most important area of 1.1250 - 1.1290, but overall, the downward trend in the instrument continues, despite the overcoming of the MA. The euro, as before, has no weighty background support, such as a strong monetary policy or a "hawkish" mood of the ECB, which would level out less important disappointing news.

The currency pair EUR / USD continues to move up. Thus, it is now recommended to consider already long positions with targets of levels 1.1322 and 1.1353, if the pair succeeds in overcoming Murray's level of "2/8".

It is recommended to return to sell orders in the case of a re-consolidation of the pair below the moving average line with targets at 1.1261 and 1.1230, as the tendency to change to a downward one.

In addition to the technical picture, you should also take into account the fundamental data and the time of their release.

The material has been provided by InstaForex Company - www.instaforex.com
EUR / USD. March 13. The trading system. "Regression Channels". The euro remains calm but shows a readiness to continue growth