EUR / USD. March 20. The trading system. "Regression Channels". We are waiting for the new "pigeon" rhetoric from the Fed 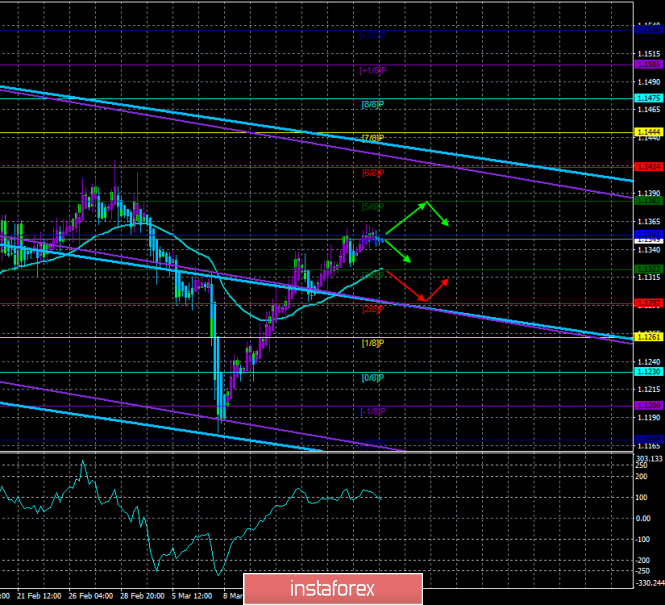 The EUR / USD currency pair on Wednesday, March 20, once again fulfilled Murray's level of "4/8" (1.1353) and still cannot overcome it. At the same time, instrument volatility remains extremely low. It is also impossible to say that, on the eve of the announcement of the results of the Fed meeting to be held today, traders give a clear preference for one of the currencies. On the contrary, just after the traders know the results of the meeting, it is possible that both volatility increases and a clear movement to one of the parties. What possible decisions can the American regulator make? First, we believe that the rate in March will remain unchanged. After a whole cycle of increases in the key rate, without any preconditions, the Fed is unlikely to start reducing it so sharply. There are very few reasons for a new increase, given the frankly "pigeon" rhetoric of Fed representatives in recent months. Secondly, as before, much will depend on the rhetoric of the Fed. If the market receives hints or clear statements that the monetary tightening cycle has been completed or that the Fed stops reducing its own balance, which has been accumulating over the years under the QE program, this could trigger a wave of sales of the US currency and Donald Trump's unrestrained joy. There are no important macroeconomic reports planned for today in the European Union.

The EUR / USD currency pair may start a new round of correction. Thus, it is recommended to open new long positions if HeikIn Ashi turns up the indicator with the target at 1.1383.

Sell positions will become relevant not earlier than a consolidation of the pair below the moving average line with targets at 1.1229 and 1.1261, as the trend for the pair, in this case, will change to descending.

The material has been provided by InstaForex Company - www.instaforex.com
EUR / USD. March 20. The trading system. "Regression Channels". We are waiting for the new "pigeon" rhetoric from the Fed