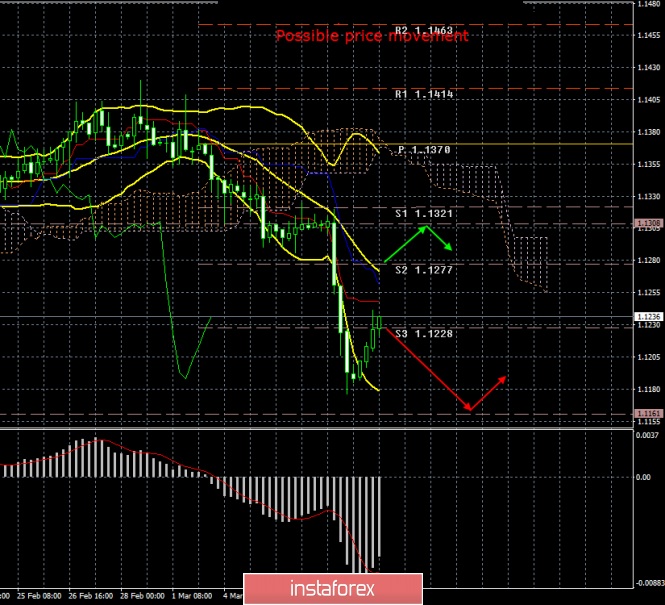 The EUR / USD currency pair on Friday, March 8, began to be adjusted from the European session itself after yesterday's collapse after the announcement of the results of the ECB meeting. The correction started in the morning on the basis of technical factors, but at the American trading session, it received fundamental support. Unfortunately, the NonFarm Payrolls report completely failed, making only 20K instead of the predicted 180K. It was this report that created additional pressure on the American currency, although, in general, the losses to the US dollar are not yet serious. The effect of the NonFarm Payrolls on unemployment slightly smoothed (decreased in February to 3.8%) and on average wages (increased by 3.4% against the forecast of + 3.3% y / y). However, after the end of the correction, the downward trend may resume, as the pair broke through the most important area of support 1.1250 - 1.1290. In any case, the downward trend remains below the critical line. Thus, the week ends with the advantage of the dollar, and next week there will be ballots in the British Parliament, after which, maybe, finally, some decision on Brexit will be made and uncertainty in this matter will be less. For the EUR / USD pair, these events are of less importance than for the pound. From a technical point of view, the MACD indicator signaled the beginning of the correction, turning to the top.

The EUR / USD pair has begun to be adjusted. Thus, to open new short positions, you should wait until the current correction is completed and the downward movement resumes, and the target will be the level of 1.1161.

Buy positions are recommended to be considered if the bulls manage to consolidate above the Kijun-Sen line. In this case, buy orders in small lots will be relevant for the purpose of 1.1308.

The red line and histogram with white bars in the indicator window.

The material has been provided by InstaForex Company - www.instaforex.com
EUR / USD. March 8. Results of the day. NonFarm Payrolls failed. The pair began a correction