EUR / USD. March 8. The trading system. "Regression Channels". The ECB meeting is over. All focus on NonFarm Payrolls 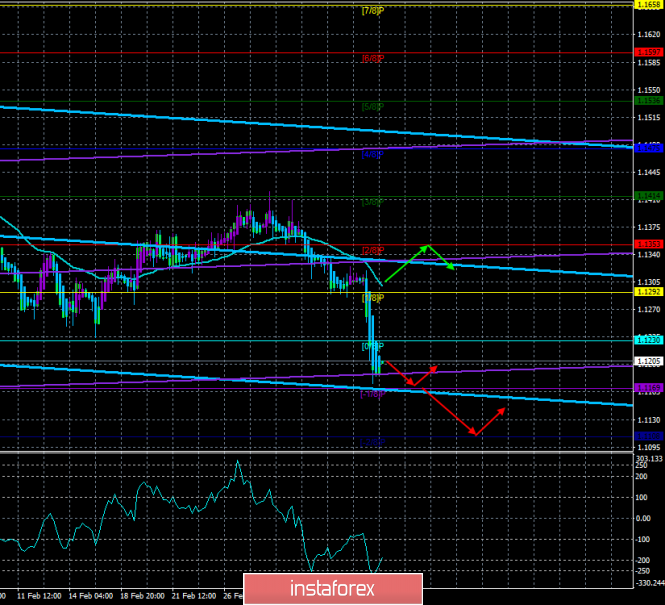 The EUR / USD currency pair resumed its downward movement on Friday, March 8, after the announcement of the ECB meeting and press conference. The main outcomes of the meetings were the reduction of inflation and GDP forecasts, the announcement of the launch of the LTRO program for long-term lending to banks, and the postponement of the completion of the period of low rates to at least the end of 2019. In general, the meeting of the regulator is absolutely disastrous for the euro currency, which only confirms the concerns of market participants about the recession in the eurozone. This is also evident from macroeconomic indicators, which are much more frustrating than encouraging. Meanwhile, the euro made its way through the important support area of 1.1250 - 1.1290, which is tested for strength at least five times. Now for the euro, the road is open down to price parity with the US dollar. On the last trading day of the week in the United States, the publishing of changes in average wages, unemployment and new jobs created outside the agricultural sector are scheduled. These reports can greatly affect the movement of the pair, the question is which of the currencies will they help? It will depend on which way real values differ from forecasts. If the reports are strong, then the US dollar can close the week with a huge advantage.

The EUR / USD currency pair has resumed its downward movement. Thus, before the beginning of the upward correction, which the Heikin Ashi indicator will signal, short positions with targets of 1.1169 and 1.1108 are relevant.

Buy positions can be viewed after the price is fixed above the moving average line. In this case, the tendency for the instrument to change to ascending again, and the first target for the long positions will be 1.1353.

The material has been provided by InstaForex Company - www.instaforex.com
EUR / USD. March 8. The trading system. "Regression Channels". The ECB meeting is over. All focus on NonFarm Payrolls