Rather weak data on activity in the manufacturing and service sectors in Germany, as well as in the eurozone, led to a sharp fall in the euro last Friday. All this once again confirms the fact that the eurozone economy is in a rather weak state, balancing on the verge of recession.

According to the report of IHS Markit, activity in the manufacturing sector in Germany continued to decline in March of this year. Despite preliminary data, traders reacted very quickly. Thus, the PMI for purchasing managers in Germany in March fell to 44.7 points from 47.6 points in February. Germany's composite PMI remained above 50, at the level of 51.5 points. An index value below 50 points indicates a reduction in activity. In IHS Markit noted that the decline in the manufacturing sector in Germany is associated with a decrease in new orders and problems with exports.

France's preliminary composite PMI returned below 50 points and dropped to 48.7 points in March from 50.4 points in February. This happened for the same reason as in Germany, due to the reduction of new orders due to falling external demand.

All of this has affected the weakness of the eurozone economy and the general indicator for the eurozone, where the decline in the purchasing managers index indicates a further slowdown in activity.

According to IHS Markit, the composite PMI PMI for the eurozone in March 2019 dropped to 51.3 points from 51.9 points in February. Economists had expected a decline to 51.8 points.

Data was released in the second half of the day on the American economy. In general, it did not affect the situation in the market.

According to a report by the US Department of Commerce, inventories in the wholesale trade in January 2019 increased by 1.2% to $ 669.87 billion. Economists had expected stocks to fall by 0.2% in January. The ratio stocks / sales in January was 1.34.

Indicators of activity in the manufacturing sector and the US service sector declined in March. The decrease in the overall figure occurred against the background of a slowdown in production growth. According to IHS Markit, the preliminary PMI Purchasing Managers Index for the US manufacturing sector in March 2019 dropped to 52.5 points from 53 points in February. The PMI for the service sector fell to 54.8 points against the February value of 56 points. Index values above 50 indicate an increase in activity.

Housing sales on the secondary market in the US rose in February. According to the National Association of Realtors, sales increased by 11.1% due to lower interest rates, accelerated earnings growth.

As for the technical picture of the EURUSD pair, the trading tool keeps the intermediate level of 1.1295 from further falling. A breakthrough of which will increase the pressure on risky assets and lead to the updating of last week's lows in the 1.1270 and 1.1225 areas. With an upward correction in the first half of the day, the euro may be limited to the level of 1.1330, however, larger resistance is seen in the area of 1.1355.

The Canadian dollar fell against the US dollar on Friday after a weak report, which indicated that retail sales in Canada declined in January 2109. 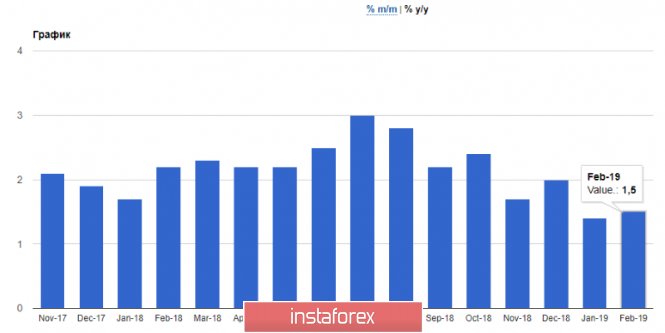 Inflation in Canada rose in February due to food prices. As indicated in the report of the National Bureau of Statistics of Canada, Canada's CPI in February showed an annual growth of 1.5%, with a target level of about 2.0%.