EUR/USD. The 7th of March. Results of the day. European currency disaster 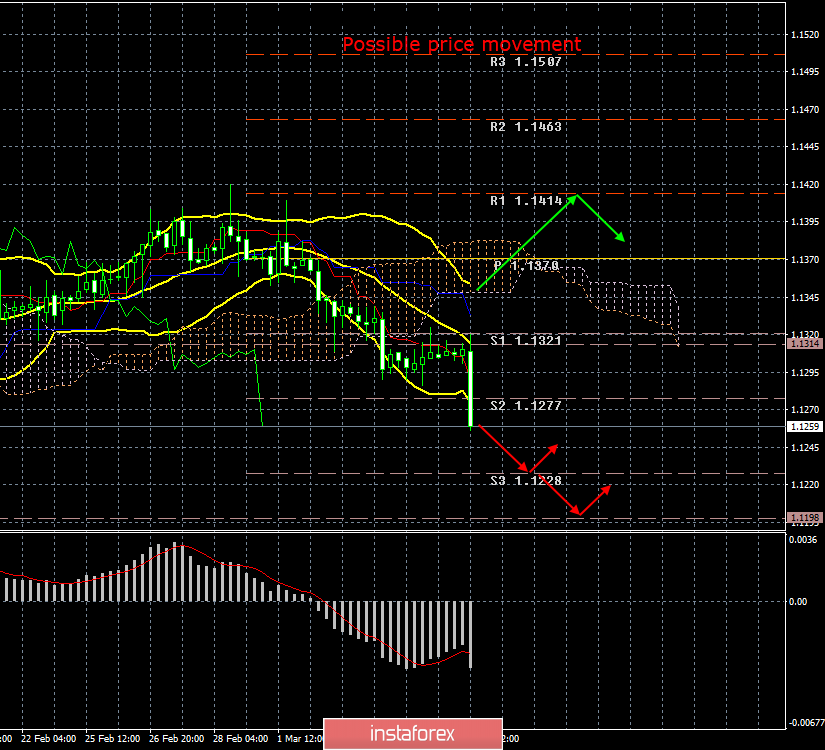 On Thursday, March 7, the EUR/USD currency pair resumed an increased downward movement following the revelation of Mario Draghi's first statements at the press conference. However, first GDP for the fourth quarter was published in the eurozone, and, as we warned, the real value of this important indicator was lower than the forecast, which was not very high (1.1% yoy against 1.2%). Thus, already at noon, the euro was under pressure. Then the ECB announced the results of the meeting. It became known that the current rate will remain at least until the end of 2019, although the wording "until mid-2019" had previously been heard. Furthermore, according to the ECB, the average value of inflation is approaching the level of 2.0%, and until it reaches it, there will be no talk of tightening monetary policy. The ECB also announced a new launch of targeted long-term loans LTRO for banks, which, in essence, means continuing to stimulate the economy. All this has already led to a decrease in the euro by 60 points. The press conference Mario Draghi has started, during which traders will be able to learn a lot of interesting things. In any case, it is clear that the euro will not receive support from the regulator and the EU economy is slowing down. From a technical point of view, the pair approached the lowest values and entered the area of 1.1250 – 1.1290, which could not be overcome 5 or 6 times before. However, with each new time, the chances of overcoming it are growing. Overcoming it will indicate the readiness of traders to carry out new sales of the European currency.

Long positions can be considered no earlier than when the the price has consolidated above the Kijun-Sen line. In this case, the actual target for the buy positions will be the resistance level of 1.1414.

The material has been provided by InstaForex Company - www.instaforex.com
EUR/USD. The 7th of March. Results of the day. European currency disaster