The euro-dollar pair is showing corrective growth today. Today, although the macroeconomic calendar is nearly empty, the day is filled with events – primarily related to the prospects of Brexit. The single currency follows the pound, which in turn has hopes for a third vote on the draft deal.

In addition, the only more or less important economic release for today was in favor of the euro. For the first time in the last six months, the IFO business optimism index showed positive dynamics. And although the growth was minimal, traders were still impressed: after the devastating figures from ZEW last week, today's publication has become a kind of "spoonful of honey in a barrel of tar." 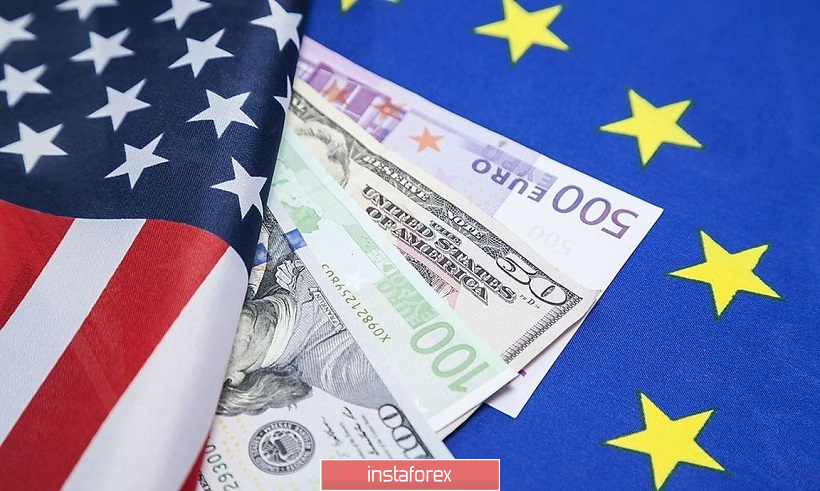 However, this fundamental factor did not become a catalyst for the EUR/USD's steady growth. First of all, this index is of secondary importance (and key indicators continue to decline), and secondly, its slight increase is unable to change the overall situation. After a surge in shoppers' activity, the pair froze in anticipation of the news drivers. One such driver could be Theresa May's speech, which is expected tonight. In the course of her speech, she can report her actions and intentions, since the market is currently disoriented by conflicting rumors.

Just a few hours ago, according to the press, the third vote for the deal would take place tomorrow, and allegedly, there is an agreement between the Conservatives and the Unionists. Against this background, the pound rose in price across the entire market, pulling the euro-dollar pair with it. But an hour later, on other sources, a refutation of this information appeared: moreover, the DPA representatives allegedly refused to support the deal, destroying the entire negotiating structure. After that, expectations began to grow that Theresa May would announce that she would resign - but only in exchange for approval of an agreement.

This scenario has been mentioned for a long time, but now is the moment when May can play her final (but the strongest) trump card. In this case, she can attract some Laborites to her side, although it is impossible to talk about this with any certainty. In any case, today's events in London can be the driving force not only for currency pairs involving the pound, but also for the euro-dollar pair. Against the background of a flat greenback, which is under the weight of its own problems, today's dynamics of the pair will depend on the single currency's behavior, which, in turn, focuses on Brexit due to the nearly empty economic calendar.

But the dollar bulls could not maintain last week's pace. The growth of anti-risk sentiment made it possible for the US currency to catch up on lost positions, but the momentum started to fade on Friday, and today it has completely disappeared. The dollar index is near the boundary of 96-96 figures, flat and showing detachment. The fact that major Wall Street indices opened in the red today amid continued flight from risk did not help the dollar.

Negotiations between the US and China are going on quite hard - this, in particular, is evidenced by the information vacuum around this issue. Traders are forced to "be content" only with rumors, which, however, also do not make investors happy. So, according to the American press, Beijing did not make concessions to Washington in the field of e-commerce, whereas this topic is among the top priorities for the White House. Another deadlock in the negotiation process worries traders, but the dollar ignores the growth of anti-risk sentiment. Apparently, the greenback is impressed by the strengthening of the "dovish wing" of the Federal Reserve. The news that Trump nominated his longtime associate and the famous "dove" Stephen Moore to the Board of Governors has unpleasantly surprised dollar bulls, who had just moved away from an extremely soft meeting of the regulator in March.

Today, it became known that a record monthly budget deficit was recorded in February: expenses went up, while revenues from the collection of corporate income taxes fell by 20%. As a result, the US budget deficit amounted to $234 billion last month, compared with $215 billion a year earlier. This is an absolute record (to be more precise - an anti-record). 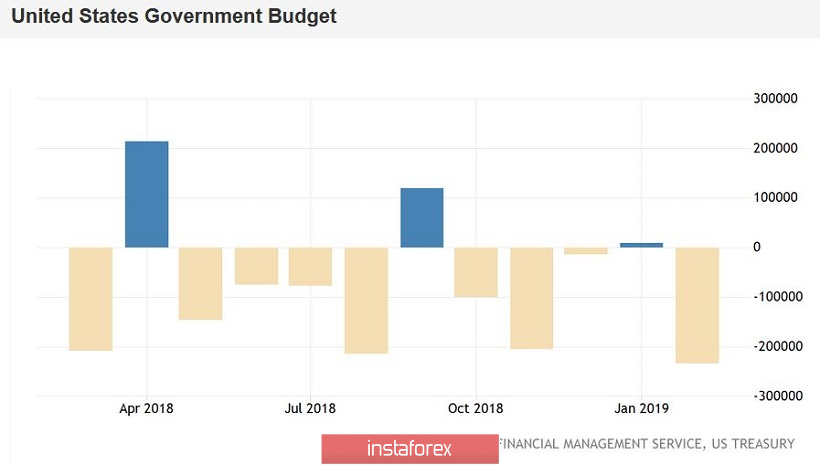 Another factor that also complements the grim fundamental picture for the dollar is the decline in the Dallas Fed Manufacturing Index. The indicator fell to 8.3 points, contrary to forecasts of growth to 9 points. The index has been falling for the second month in a row. Despite the secondary importance of this indicator, the dollar still reacted to its decline.

Thus, the US currency currently has no power and arguments to dominate in dollar pairs. The single currency, in turn, focuses on the Brexit theme. That is why the upward dynamics of EUR/USD is largely dependent on political events in London. If the British are one step closer to the deal's approval, the pair will grow at least to the Tenkan-sen line on the daily chart (1.1360 mark) and further towards 1.1400 (the upper limit of the Kumo cloud on the same timeframe). Otherwise, the price will return to the area of the middle of the 12th figure.