EUR/USD. March 25. Results of the day. Trade negotiations between China and the United States could stretch out like Brexit 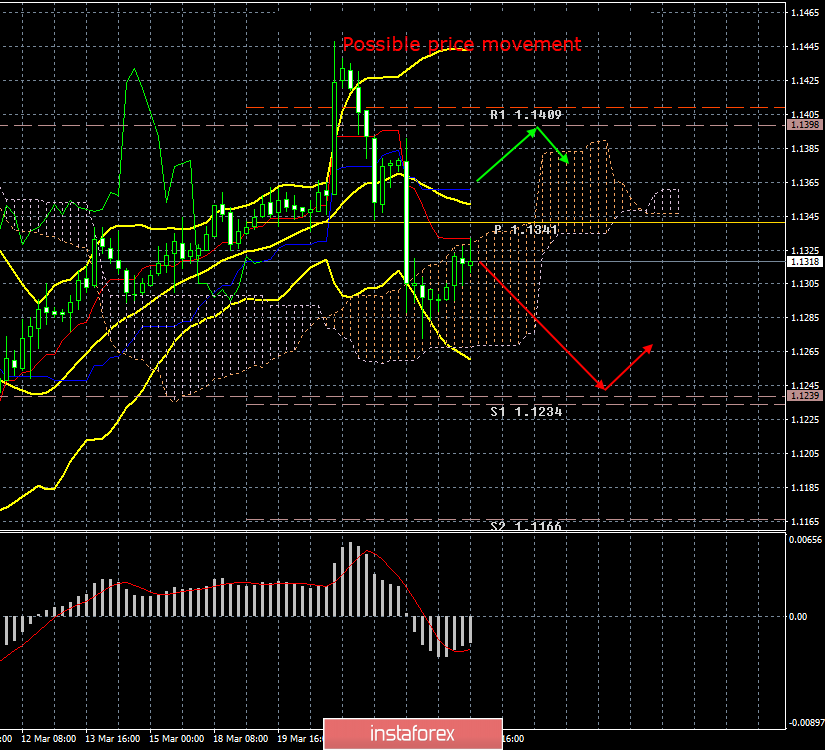 On the first trading day of the new working week, the EUR/USD currency pair started an upward correction, as we expected in the morning. The correction was suggested after a landslide. The corrective movement's goal is the critical Kijun-sen line. Today's volatility, has certainly decreased, since the macroeconomic event calendar does not contain any important news. Most traders are still closely monitoring the situation around Brexit and the political crisis in the UK, and the EUR/USD pair could start to lose attention. In the meantime, negotiations between the United States and China are continuing on a number of conditions that in the future will merge into a trade agreement that can put an end to all differences between the two countries. However, if a week ago it seemed that the parties would come to an understanding without any problems, and Donald Trump had even managed to shift his attention to the European Union, which, in his opinion, also "unfairly treats the United States", now we can say that the negotiations are progressing slowly. There were new points of misunderstanding between the two parties, in the field of electronic commerce in particular, which is very important for the American side. Washington wants to weaken the legislation of China, which involves the storage of information only in China, thus, "discriminating" American cloud companies that are seeking the Chinese market.

The EUR/USD pair has started to adjust against the "dead cross". Thus, it is now recommended to wait for the completion of the correction, and then resume trading for a fall with the first target level of 1,1239.

Buy positions are recommended to be considered if the pair manages to consolidate above the critical line, with a target at the level of 1.1398.

The material has been provided by InstaForex Company - www.instaforex.com
EUR/USD. March 25. Results of the day. Trade negotiations between China and the United States could stretch out like Brexit