EUR/USD. March 26. Results of the day. The euro at a loss. Where to look next? 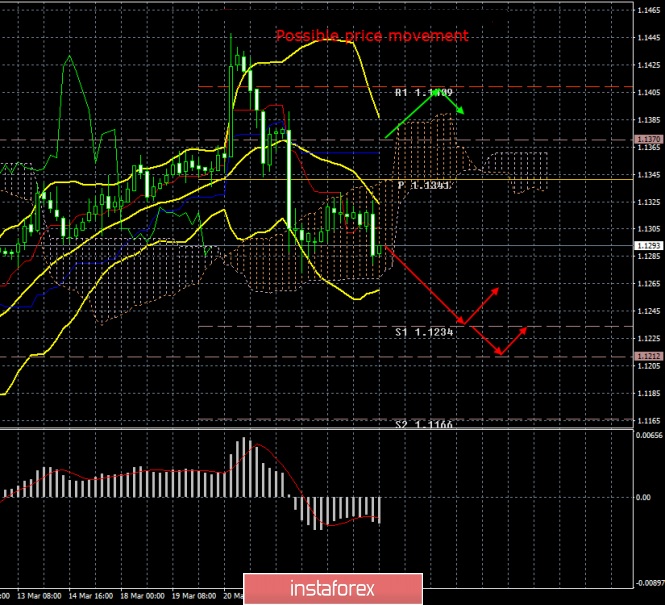 At the European trading session on Tuesday, March 26, the US dollar rose against the European currency, but the pair did not manage to leave below the previous local minimum. Thus, the pair retains both the chances for further downward movement and the chances for the beginning of the formation of a new uptrend, which is more preferable, based on the long-term distribution of forces between the economies of the US and the EU. It should also be noted that the pair continues to trade within the Ichimoku cloud, so the "dead cross" sell signal remains weak. Thus, in the current situation, it remains to wait for clarification. Important fundamental data neither yesterday nor today were available to traders. As for the US dollar, despite the fall in yields on 10-year bonds, a lot of talk about recession, the huge public debt of the United States and the fact of such an odious president like Donald Trump, this currency continues to hold positions against the euro currency. This is especially well seen on higher timeframes. The European Union has nothing to hide in macroeconomic terms. The growth rates of its economy are inferior to those of the United States, it's not even worth talking about monetary policy, and the divorce process with the UK can still result in a "tough" scenario. In general, the key factors are now technical, trading should now be done with heightened accuracy - there is no pronounced trend, and in the long run - in general, flat.

The pair EUR / USD is trying to resume the downward movement. Thus, short positions in small lots are now recommended for the support level of 1.1234.

Buy orders are recommended to be considered if the pair succeeds in consolidating back above the critical line, with a view to the resistance level of 1.1409.

Redline and histogram with white bars in the indicator window.

The material has been provided by InstaForex Company - www.instaforex.com
EUR/USD. March 26. Results of the day. The euro at a loss. Where to look next?