EUR/USD. March 28. Results of the month. Euro – dollar: the situation is leveled 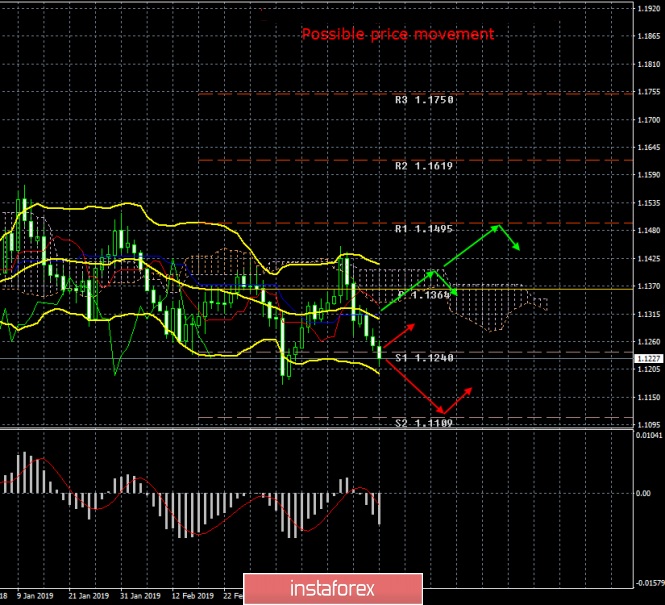 The third month of 2019 for the European currency can be called negative. The European currency lost about 140 points against the US dollar, which, in principle, is not so much, if you do not to take into account all the previous losses. And so it turns out that the euro has lost another 140 points. The most interesting thing is that from a fundamental point of view, the confrontation between these currencies began to level off, although the advantage still remains with the US currency. After the Fed announced the completion of the course to raise the key rate, a clear advantage in the US monetary policy was leveled. At the same time, the economy of the States and the monetary policy of this country still remain much stronger. How about the EU? The EU still does not even think about tightening monetary policy, and the recent speech by Mario Draghi was marked by the extension of the period of ultra-low rates to at least the end of 2019. Further, the risks, according to Mario Draghi, remain downward, the ECB has launched a new TLTRO program to support the banking and financial systems. The index of business activity in the European Union is falling and the IDA of industrial production is already below 50, which means a potential inhibition of the economy. Moreover, if the States begin to put more pressure on the EU in trade negotiations (according to Trump, the EU also "unfairly treats the US"), it is the EU economy that will be the first to suffer. About Brexit, it is not even worth talking about. The very fact that it is not clear when and how it will end is not in favor of the European currency. In general, there is no frank signal to the new fall of the euro, but this may well happen. Around the current levels a reversal may occur, since the support area of 1.1200 - 1.1270 is extremely strong, but it cannot hold the pair above itself forever.

The trend for the pair is again changing to a downward one, but the further downward movement raises some doubts now. In the current price area, you can expect a reversal upward. However, a strong growth of the Euro is not expected, given the lack of fundamental support. Thus, the long-term flat may continue.

The material has been provided by InstaForex Company - www.instaforex.com
EUR/USD. March 28. Results of the month. Euro – dollar: the situation is leveled