EUR/USD. March 29. The trading system. "Regression Channels". Hopes of the euro only on the strength level of 1.1200 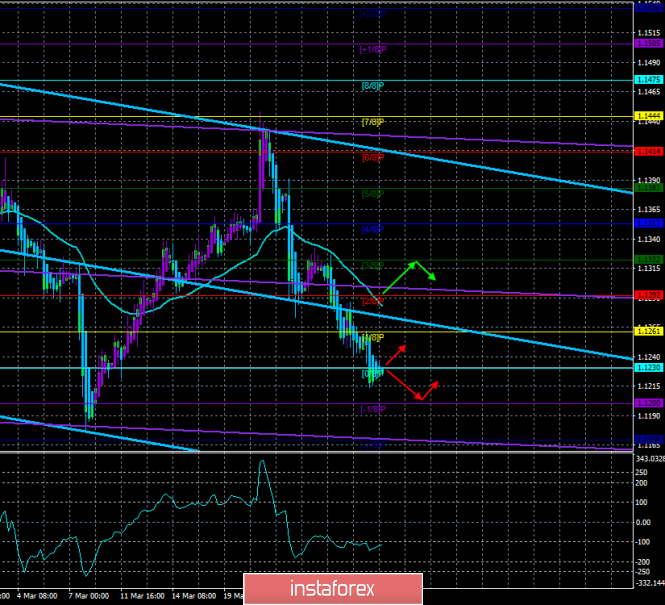 On Friday, March 29, the EUR/USD currency pair continues to move down as if nothing had happened. Yesterday, there were high hopes that the US GDP report for the fourth quarter would support the euro. The report was indeed weaker than the forecast values, but instead of the expected growth of the euro, we saw another fall. This concerns not only the euro, but also, for example, the pound sterling. Thus, it can be assumed that traders ignored the report on GDP because they have already outlined a long-term trading strategy, and it implies the sale of the euro. Therefore, on the last trading day of the week and months, we can see a small rollback up, but then there will definitely be attempts to continue moving down. Embarrassing, while the area of support 1.1200 - 1.1270 is still relevant that the bears failed to break with approximately seven attempts. However, this cannot continue all the time, and sooner or later it will not stand. Moreover, traders still do not see significant fundamental reasons for at least medium-term purchases of the European currency. Today, there will be no important macroeconomic publications in the eurozone, and information about changes in personal incomes and expenditures of the population will come from the States.

The currency pair EUR/USD continues to move down. Thus, now it is still recommended to consider sell orders with targets at 1.1200 and 1.1169. The reversal of the Heikin Ashi indicator to the top will indicate the start of an upward correction

Buy positions are recommended to be considered no earlier than fixing the pair back above the moving average line with targets at 1.1322 and 1.1353, but at the moment, this option is unlikely.

The material has been provided by InstaForex Company - www.instaforex.com
EUR/USD. March 29. The trading system. "Regression Channels". Hopes of the euro only on the strength level of 1.1200