EUR/USD: plan for the US session on March 29. Euro buyers return to the market

To open long positions on EURUSD you need:

If in the first half of the day, the buyers of the European currency failed to get above the resistance of 1.1240 against the background of diverse fundamental statistics for the eurozone countries, then the bulls were able to hold the support level of 1.1208. At the moment, it is best to look at long positions in the euro after breaking through and consolidation above the resistance of 1.1240, where you can expect growth to the maximum area of 1.1269 and 1.1294, where I recommend taking profits. In the case of a repeated wave of EUR/USD decline in the afternoon, new purchases can be considered from the same support level of 1.1208 and a rebound from the new minimum of 1.1176.

To open short positions on EURUSD you need:

Weak inflation reports in France and Germany put pressure on the euro in the first half of the day, which led to a decline in the support area of 1.1208, which I paid attention to in the morning review. At the moment, while trading is below the 1.1240 range, the pressure on the euro will continue, and the bearish target will again be at least around 1.1208, a breakthrough of which will lead to a larger EUR/USD sale to the support area of 1.1176, where I recommend taking profits. When scenarios return EUR/USD to the resistance level of 1.1240 in the second half of the day, it is best to consider short positions on a rebound from the maximum of 1.1269 and 1.1294.

Trade is conducted below the 30-day and 50-medium moving, which indicates the preservation of the bearish nature of the market. However, a breakout of the slide could lead to a sharp rise in the euro.

An upward correction on the euro will be formed in case of a break of the upper border of the Bollinger Bands indicator in the 1.1240 area. 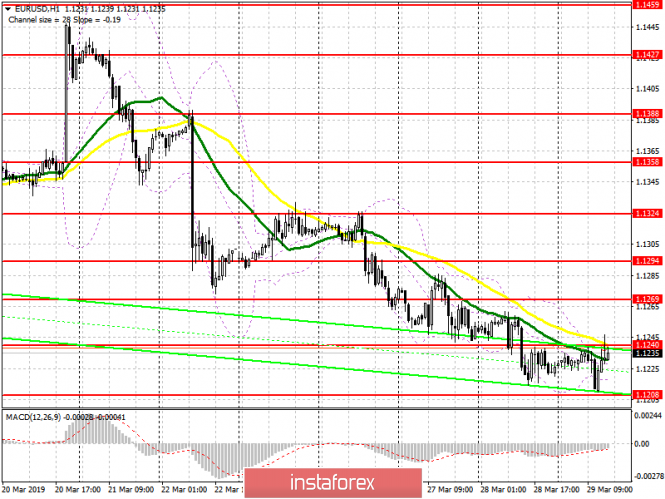 The material has been provided by InstaForex Company - www.instaforex.com
EUR/USD: plan for the US session on March 29. Euro buyers return to the market