On Friday, the euro plunged into the 12th figure within a fairly strong downward pulse. Bearish sentiment among traders is due to several reasons. First, it is the growth of anti-risk sentiment in the market, and secondly - the release of disappointing data from Europe. The Brexit theme has added a negative fundamental picture: the growing tangle of contradictions completely confused investors. As a result, the pair lost almost 200 points in two days, marking new price targets.

It is worth noting that the single currency was declining even against the backdrop of a weakening dollar, which is also under certain pressure after the Fed's dovish meeting and the news that Trump plans to appoint Stephen Moore, who is a consistent supporter of soft monetary policy, to the Board of Governors of the Federal Reserve. But EUR/USD traders shifted the focus of their attention from American events to European problems, especially since the dollar was also used by many market participants as a defensive asset. 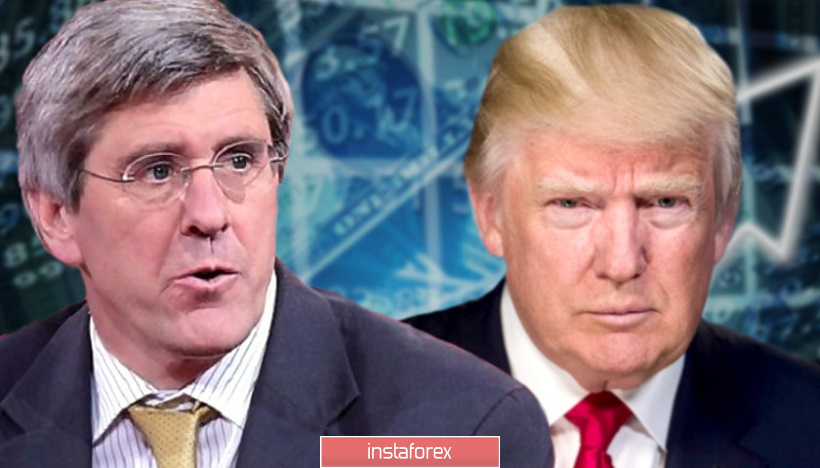 But the recently published European data were disappointing. The German manufacturing activity index (PMI), contrary to forecasts, has declined again - that's three months ago. Since January, this indicator has been below the key 50th mark, thus demonstrating the deterioration of the situation. Experts predicted a slight increase - from 47.6 to 48.0 points, but the real numbers were much lower - at around 44.7 points. The French also disappointed: after two months of staying above the level of 50, the indicator was again in the area of 49 points. The European PMI showed a similar trend, confirming the presence of a systemic problem. It is worth recalling here that during its March meeting, the European Central Bank had once again lowered its forecasts for GDP growth and inflation - the second time in the last three months. According to the regulator, the eurozone economy will grow by only 1.1% this year, while the previous forecast suggested an increase of up to 1.7%.

Regarding inflation, the US central bank also significantly reduced its expectation: growth is projected to reach 1.2% this year (against the early forecast of 1.6%), and to 1.5% next year (against 1.7%). Judging by the dynamics of PMI, real GDP figures are barely reaching the forecast level. In turn, all this suggests that the matter of raising the rate will not be considered until the second half of next year, whereas traders should not rule out a reverse step this year. Although the monetary policy easing scenario was not discussed at any of the recent meetings, such an option cannot be ruled out, given the recent releases. 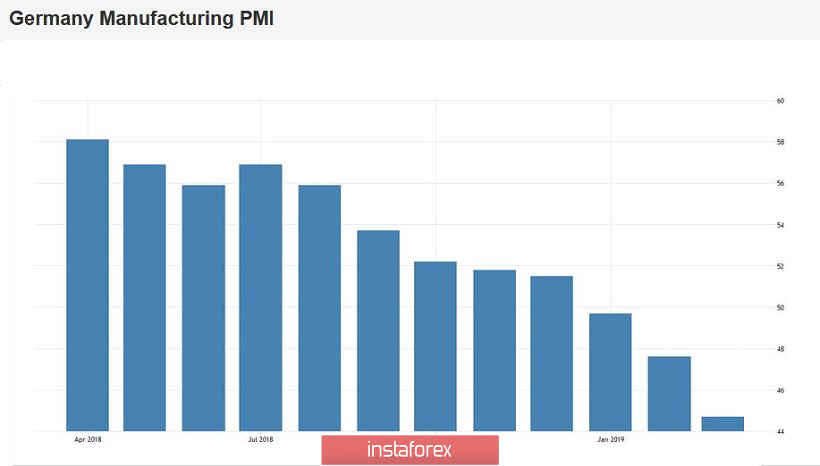 The market is well aware of this fact. Obviously, the rhetoric of ECB members will only soften in the near future, especially against the background of "stalling" negotiations between the US and China. According to rumors, Trump significantly tightened his position on future trade relations, after which the negotiation process became more complicated. This fact increased the pressure on the single currency, since the European economy is largely dependent on the Chinese. China is the second largest trading partner of the European Union (after the United States), the volume of trade between them exceeds 1.5 billion euros per day. For example, in 2017, EU exports to China amounted to $198 billion, and imports from there were valued at 374 billion. Therefore, the prospects of resuming a trade war between the superpowers are scaring traders, especially against the background of a slowdown in the growth of China's GDP.

The growing uncertainty around Brexit also does not make it possible for EUR.USD buyers to show character. The latest events have brought the situation to a standstill: on the one hand, Brussels voiced harsh conditions of a delay, on the other hand, the British deputies continue to stand on their own. In addition, many Britons are demanding the abolition of Brexit as such: almost 5 million British citizens have already signed the petition on the internet. On Saturday, tens of thousands of them came out to protest, demanding to leave the country in the European Union. It is difficult to predict how this epic will end. The uncertainty exerts indirect pressure on the single currency, increasing the overall pressure.

At the same time, it should be remembered that the US currency is also going through hard times. By and large, the greenback regained its position only due to global tensions over the prospects of US-Chinese relations and the world economy as a whole. But if we ignore this issue, there is no support for the dollar anymore. The Fed finally paused the process of tightening monetary policy, while Trump plans to strengthen the Fed's "dovish" wing. The other day he said that he would nominate Stephen Moore to the Senate for approval as a member of the governing council of the Fed. Moore is an active critic of hard monetary policy in general, and Jerome Powell in particular.

In addition to this fact, dollar bulls were also disappointed with the data on manufacturing activity (ISM) in the US, which was much worse than expected, having updated an eighteen-month low (although still above the 50-mark, in contrast to European similar indicators).

Thus, the euro-dollar pair has the potential to further decline. But downward dynamics might be limited. The price is approaching a strong support level of 1.1220 (the bottom line of the Bollinger Bands indicator on the daily and weekly charts). This level was "too tough" for bears of the pair, who twice in the last six months tried to gain a foothold in the 11th figure. Therefore, when approaching this target, you should be careful (denoting stop-loss) or consider long positions. The nearest upward target of corrective growth is the mark of 1.1340, which corresponds to the lower boundary of the Kumo cloud on the daily chart.