EUR/USD: weak inflation in Germany and weak GDP growth in the US

Today, the euro-dollar pair came close to the support level, which is located on the bottom line of the Bollinger Bands indicator on the daily chart (and corresponds to the mark of 1.1205). But the eur/usd bears could not decide on the breakdown of this level, especially after the release of data on the growth of the US economy. Therefore, despite a rather strong downward pullback, the downward impulse did not receive its confirmation - for this, sellers need to gain a foothold in the area of the 11th figure.

The catalyst for the European currency's decline was the release of the growth of German inflation. Last month, the consumer price index in Germany (in annual terms) showed a positive trend (+1.5%) after a strong decline in January. However, in March, the rate slowed again, at around 1.3%. This fact has disappointed investors, since German inflation makes a significant contribution to European growth. 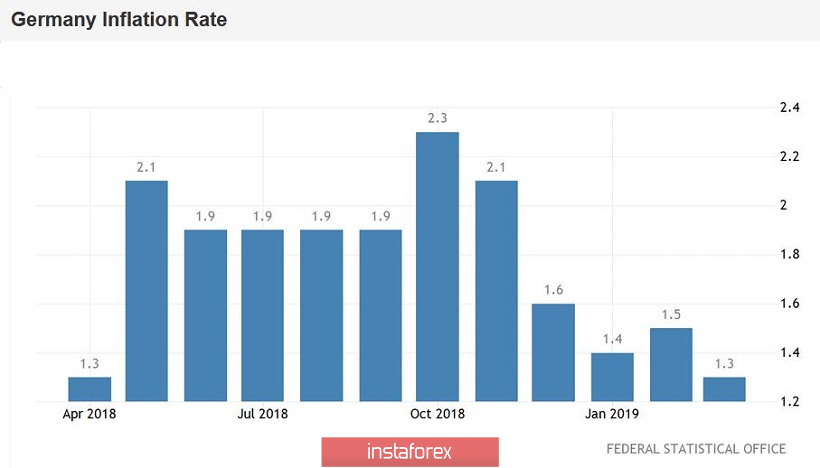 This is not the first disappointing report from Germany lately. Last week it became known that the German manufacturing activity index (PMI), contrary to forecasts, fell again - already the third month. Since January, this indicator is below the key 50th mark, thus demonstrating the deterioration of the situation. Experts predicted a slight increase (from 47.6 to 48.0 points), but the real numbers were much lower - at around 44.7 points.

The European Central Bank has repeatedly lowered its forecasts for GDP growth and inflation in the current year - according to the latest estimates, the eurozone economy will grow by only 1.1% (the previous forecast suggested an increase to 1.7%). But given the dynamics of the German indicators, the European regulator may again revise its forecasts - naturally, in the direction of a decline. The ECB's next meeting will be held on April 10, however, in my opinion, the regulator will draw conclusions at the beginning of summer, that is, on June 6 (there will be no meetings in May).

However, the market fears not so much a reduction in forecast estimates, as a reduction in interest rates. The RBNZ 's March meeting served as a "wake-up call" for many traders: for the first time, monetary policy easing was mentioned openly, and what is called in a "loud voice". Simultaneously, the central bank meetings of New Zealand and the United States sounded similar appeals. Stephen Moore, who is likely to be approved by the Congress to the Board of Governors of the Fed, called on Jerome Powell to reduce the rate immediately by 50 points. Therefore, it is only natural that weak European reports raise the likelihood of mitigating rhetoric in the ECB camp.

However, for the time being, Mario Draghi is trying not to escalate the situation: he does not talk about a likely rate cut, although the market is not encouraging it. Speaking yesterday in Germany, he admitted that the eurozone faced a "steady deterioration in external demand," so the European Central Bank is ready to postpone the planned increase in interest rates "for a longer period." Given the fact that the market is now focused on the first half of 2020, a further decline will move the approximate date of the rate increase for December of the next year or even for 2021.

Here we should not forget that Draghi will leave his position this fall, and the central bank's future policy will largely depend on the views of his successor. If the ECB is headed by Benoit Kurre, the dovish line of the regulator will continue, but if Erkki Liikanen (head of the central bank of Finland) wins in the backstage fight, then the number of hawks will somewhat increase. It is still too early to talk about this (the selection procedure will begin only in May), but in any case, nobody canceled the risk of a rate reduction - and the current data once again reminds us of such a probability.

This factor was caused by the EUR/USD's decline in rate for today . At the beginning of the US session, the downward impulse was suspended due to unexpected news from the United States. It turned out that economic growth in the US in the final quarter of last year slowed down more than the initial estimates: indicators of consumer and government spending were revised downward, and quite significantly. Today, the final assessment of these indicators was published, and the release was in the "red zone". GDP growth was revised from 2.6% to 2.2%, and the price index of GDP - from 1.8% to 1.7%. Such dynamics put pressure on the US currency, but at the same time provoked panic in the markets. The threat of a repetition of "2008" again reminded of itself, with all the ensuing consequences. 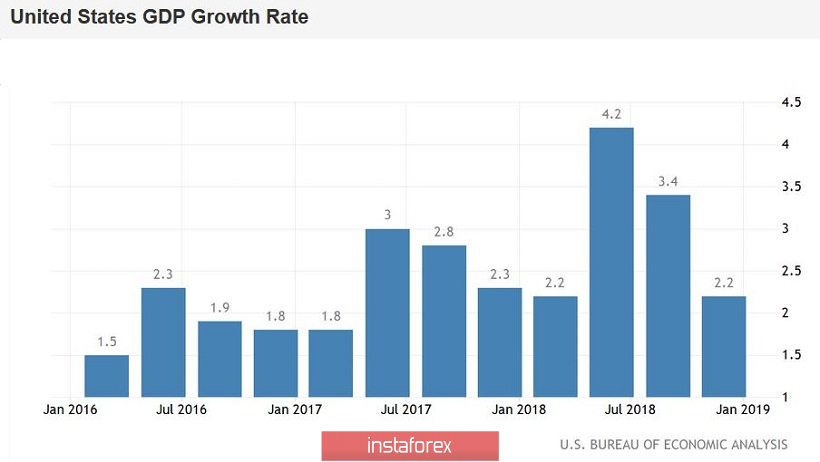 Thus, the main task of EUR/USD bulls at the moment is to keep the level of 1.1205 (the bottom line of the Bollinger Bands indicator). For the bears, the opposite task is to gain a foothold in the area of the 11th figure. If sellers do not have enough strength to reduce, then a corrective pullback to the boundaries of the 13th figure is quite likely, where the middle line of the Bollinger Bands indicator coincides with the Kijun-sen line on the daily chart.

The material has been provided by InstaForex Company - www.instaforex.com
EUR/USD: weak inflation in Germany and weak GDP growth in the US