Today, the ECB will present its vision of monetary policy for the near future to the public. In the mood of the investment community, according to media reports, one main idea can be traced – against the backdrop of the deterioration of economic indicators in Europe, May elections to the European Parliament, after which candidates for the post of head of the ECB will be named, and Mario Draghi leaves his post in October, the European Central Bank will not change the current policy of waiting for "new incoming data", except that it will clarify the details of the new TLTRO cycle – concessional lending to institutional borrowers. This company is already working not in favor of the euro, as it implies a lack of cheap money. But TLTRO is not conducted from a good life, it is an anti-crisis measure, and the reason lies in the proximity to the recession of Italy and, more importantly, Germany. But if we do not dramatize the situation, this issue is rather psychological, since in 2011-2012 such operations were not successful (relatively did not have, the demand was, but much lower than the expectations of the regulator). On the other hand, financial markets are still growing, so the security deposit of creditors will increase in price and it makes sense to play the old game a little, but in new conditions.

But the ECB may not indicate the timing of the LTRO's launch, only to announce such a program with the intention of market demand and assessment of economic conditions in the near future, that is, its feasibility. According to some reports, the announcement of the program will be at the June meeting of the ECB.

Delaying the beginning of the program automatically means that it is not that bad in the eurozone economy. Indeed, the latest data showed an increase in the CPI (1.5% yoy), retail sales (1.3% in January), the preservation of unemployment by 7.8% against the pessimistic forecast of its increase.

In general, we adhere to the traditional approach of assessing the rhetoric of financial politicians – if nothing good is said, then we should look for weakness somewhere else. This is how markets have recently reacted to the neutrality of verbal information. The market supports the current trend - a rule that we expect to see today. 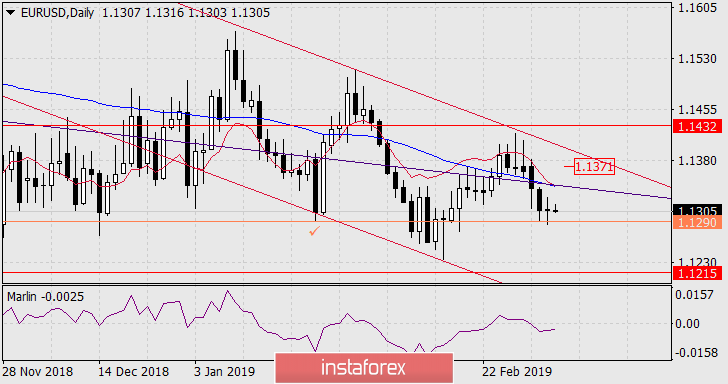 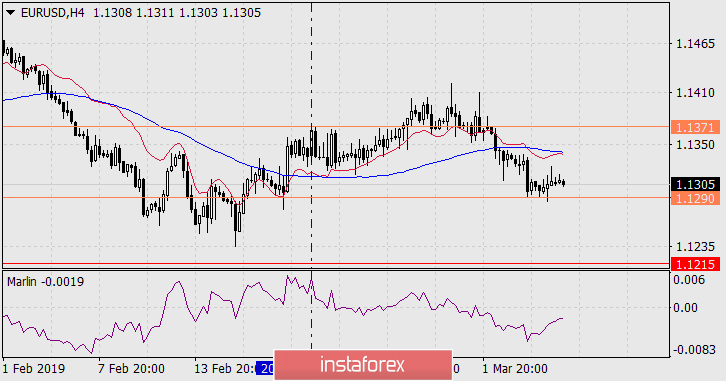 Technically, the euro is completely in a downward trend - by all indications of indicators on both scales – daily and four-hour. To increase the price, it is necessary to consolidate above the MACD line and the balance line of the daily chart, above 1.1371, since the balance line will increase with the price growth, and the price should grow faster than this indicator line. By overcoming this level, the Marlin oscillators on the daily and H4 will be in the growth zone and the price will star an attempt on new bullish goals, and the first of them – 1.1432 – a low on October 19 and 9 of last year.

Maintaining prices under the signal level of 1.1290, respectively, opens up a direct path to 1.1215. Further 1.1160 - support for the downward red price channel.

The material has been provided by InstaForex Company - www.instaforex.com
2019 Forecast for EUR/USD on March 7