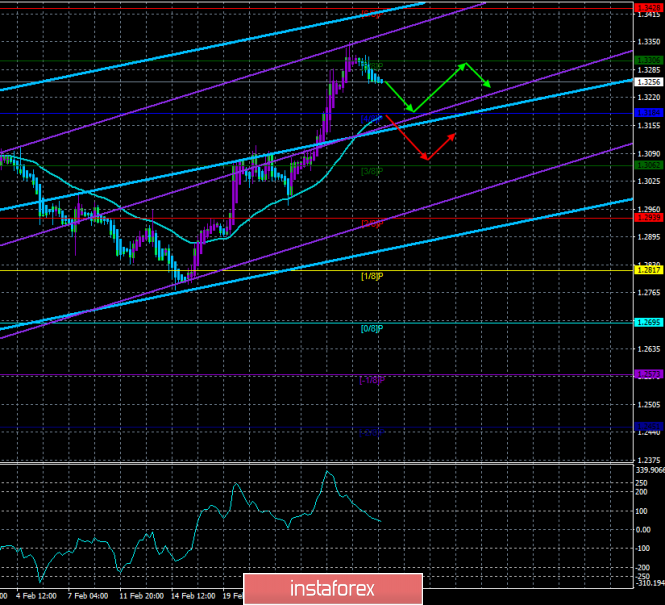 The GBP / USD currency pair has begun a weak downward correction to the moving average. It seems that at this stage, the enthusiasm of traders regarding the possible transfer of Brexit to a later date has dried up. Meanwhile, the Minister of Agriculture of Great Britain, George Eustice, resigned on the grounds of a desire to "be free during the political debates of the near future." Also, Eustice said that postponing Brexit to a later date would allow Brussels to dictate terms that would "humiliate the UK". Thus, this is the sixth resignation of a high-ranking official in the British Government due to disagreement with politics or certain decisions of Theresa May. The situation thus remains uneasy in all aspects, therefore the growth of the British pound sterling in recent days still looks unreasonable and surprising. Suppose it was acceleration before the new fall, then now is the time for this fall to begin. From a technical point of view, it will be possible to talk about the formation of a downtrend only after overcoming the moving average line. Up to this point, it is still recommended to trade with the trend. Today in the UK, the publication of an index of business activity in the manufacturing sector is scheduled. The value of this indicator in the past month went under level 50, which is a negative trend.

The pair GBP / USD started the correction. Thus, it is recommended to open buy orders in case of a Heikin Ashi indicator turning up with a target of 1.3306, which has already been worked out.

It is recommended to open the short positions in case the pair overcome the moving average. In this case, the trend in the instrument to change to downward, and the first goal will be the Murray level of "3/8" - 1.3062.