GBP / USD. March 11. The trading system. "Regression Channels". UK: will there be a second referendum? 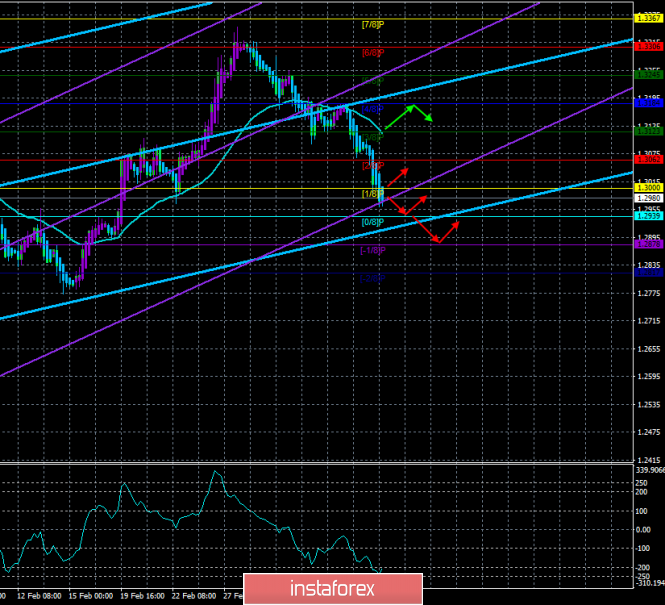 The currency pair GBP / USD continues to move down. On Monday, March 11, it is likely to be the most peaceful day for the pound this week. Recall that tomorrow, March 12, the first vote will be held in the British Parliament - by agreement of Theresa May with the EU. According to the absolute majority of experts, as well as members of parliament themselves, this transaction will be rejected. The reason is simple as a day, the current version of the "deal" is not much different from what the parliament blocked in January. The negotiations of the last months between London and Brussels yielded no results. On March 13 and 14, a vote will be held for leaving the EU without a "deal" and for a deferment of Brexit. And, most likely, Brexit will take two or three months. Thus, the position of Theresa May after the very likely failure of the new vote will be further undermined. No one doubts that the prime minister has been finalizing the last weeks in parliament. It is expected that Theresa May will resign no later than June 2019. However, the question remains with further negotiations with the EU. The postponement of Brexit will give extra time, but for productive negotiations, we need the desires of both sides to make concessions. Otherwise, we will get a new Brexit lock in three months. Maybe it's better to hold a second referendum?

The pair GBP / USD continues to move down. Thus, now sell orders with targets 1.2939 and 1.2878 are relevant before the start of the upward correction, which Heikin Ashi indicator will signal.

Buy positions are recommended to be opened in case the pair manages to overcome the moving. In this case, the trend in the instrument will change to ascending again and the long positions with targets at 1.3184 and 1.3245 will become relevant.

The material has been provided by InstaForex Company - www.instaforex.com
GBP / USD. March 11. The trading system. "Regression Channels". UK: will there be a second referendum?