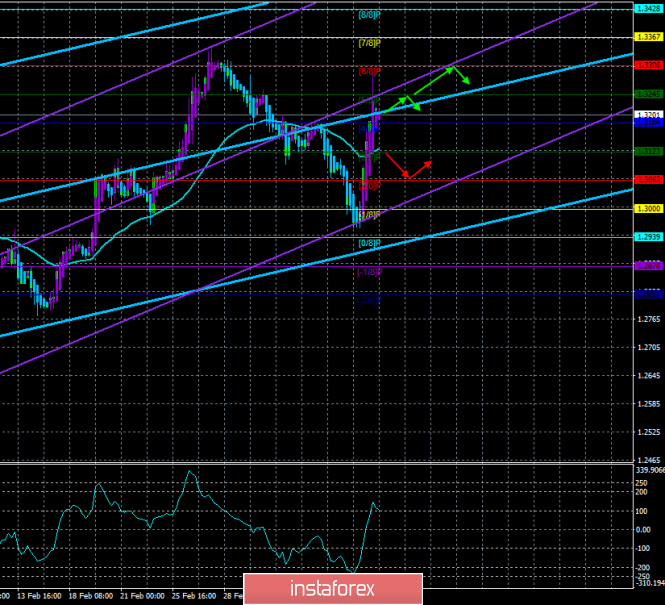 The currency pair GBP / USD yesterday made an impressive leap up and broke the moving average line, thus changing the upward trend. From our point of view, nothing supernatural happened yesterday. The market has once again responded with powerful purchases to rumors and unverified information on the Brexit topic. This time, there was information that Theresa May and Jean-Claude Juncker agreed on certain amendments to the Brexit agreement document. It is reported that these amendments relate to "backstop" and guarantees to ensure openness on the border between Ireland and Northern Ireland and the possible replacement of "backstop" to any trade agreement. How this information relates to the fact that earlier Juncker reported that there would be no new negotiations and concessions is not clear. It is also unclear what kind of sacrifices Theresa May made of such amendments. If today at the vote it turns out that the wishes of the parliament on the "backstop" are taken into account, but other concessions to the EU have been created, this may again end in failure. However, at the moment, it should be recognized that the likelihood that the "deal" will be approved today by the British Parliament has really increased significantly, although, in our opinion, it does not exceed 50%. However, in this context, today can indeed be a fateful day for the UK.

The pair GBP / USD has begun a sharp upward movement. Therefore, at the moment, long positions with targets at 1.3245 and 1.3306 are relevant, and the turning down of Heikin Ashi will signal the beginning of a correction.

It is recommended to open a sell position if the pair manages to consolidate below the moving average. In this case, the trend in the instrument will change to down again and short positions with targets at 1.3062 and 1.3000 will become relevant.

The material has been provided by InstaForex Company - www.instaforex.com
GBP / USD. March 12. The trading system. "Regression Channels". Day X for the pound sterling and the UK