GBP / USD. March 13. The trading system. "Regression Channels". The expected failure of Theresa May in Parliament 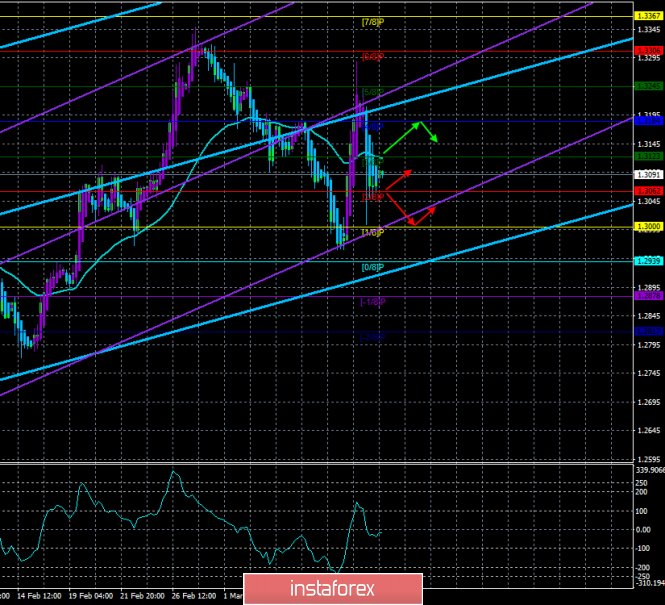 The GBP / USD currency pair resumed its downward movement yesterday, very predictably, but it would be even more expected to see a strong decline in the British pound. The fact is that the vote on the agreement of Theresa May with the EU in the British Parliament yesterday completely failed. 391 parliamentarians voted against the "deal, while only 242 politicians were "for". Thus, the epithet "deafening" is ideally suited to the word "failure" in these conditions. We said yesterday that, most likely, there were no super-arrangements between Juncker and Theresa May. Or, in exchange for concessions in the legal status of the backstop, Theresa May proposed something that, again, runs counter to the interests of parliament. In general, nothing unexpected happened. Today, there will be a vote for leaving the EU without any agreements. And this vote is likely to fail also. Tomorrow, there will be a vote for the extension of the terms of Brexit, which can be taken. However, a question arises that the prime minister has already voiced: what does the parliament want to achieve by delaying Brexit? Holding a second referendum? Refusal to leave the EU? Exit, but on the terms of the parliament itself? Most likely, the latter, but parliamentarians should clearly understand that the EU will no longer be inferior to anything to Theresa May. Accordingly, there will be no new agreements. In general, the United Kingdom has driven itself into a situation where there is no way out that would satisfy everyone.

The pair GBP / USD resumed its downward movement. Thus, short positions with targets of 1.3062 and 1.3000 are again relevant. At the same time, we urge to be cautious with any positions, since there are still two important ballots ahead in parliament.

Buy positions are recommended to be opened in case the pair manages to consolidate above the moving average. In this case, the trend in the instrument will change to ascending again and the long positions with targets at 1.3184 and 1.3245 will become relevant.

The material has been provided by InstaForex Company - www.instaforex.com
GBP / USD. March 13. The trading system. "Regression Channels". The expected failure of Theresa May in Parliament