GBP / USD. March 20. The trading system. "Regression Channels". The key events of the day: inflation in the UK and the Fed 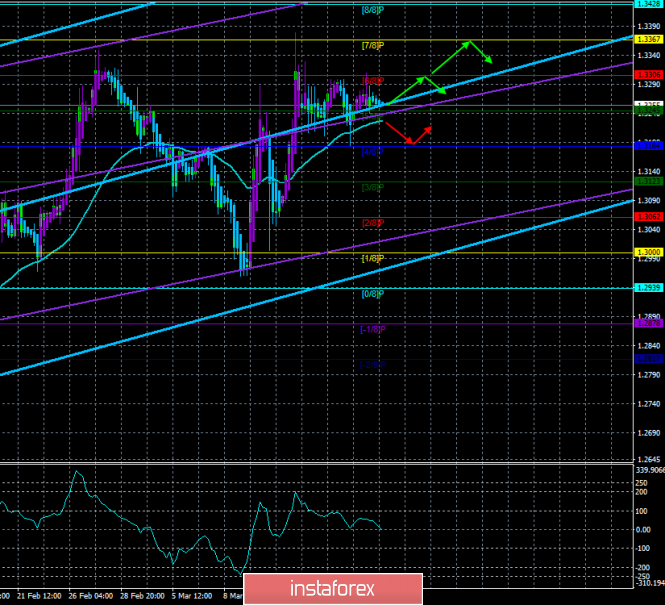 The GBP / USD currency pair remains near its local maximums and cannot overcome the Murray level "6/8" (1.3306). Meanwhile, Theresa May is going to Brussels to ask the EU to postpone the exit from the EU until June 30, 2019. Well, this is the most obvious scenario. However, as we have said many times before, by and large, this delay does not solve anything if the current version of the "deal" with the EU is not revised or supplemented so that it suits both the British Parliament and the European Union. Given the reluctance of EU leaders to enter into new negotiations, it will be extremely difficult to achieve this. At the same time, Theresa May remains faithful to her most important method of influencing parliament - threats. Once again, she noted that the parliament should support its version of the agreement, otherwise Brexit may never happen at all or the country will have a "hard" option. In general, nothing new. Yesterday's publications in the UK can even be called moderately positive since the unemployment rate unexpectedly dropped to 3.9%, and the average wage, including bonuses, rose by 3.4%, although forecasts were lower. Today in the UK, inflation will be published in February, and in the evening, the results of the Fed meeting and a press conference will be announced.

The pair GBP / USD has launched a new round of downward correction, as Murray's level "6/8" remains unresolved. If this level is still overcome, the purchase orders will be relevant to the objectives of 1.3367 and 1.3428.

It is recommended to open short positions in case the pair is able to overcome the moving average line. In this case, the trend in the instrument will change to downward and become relevant short positions with targets at 1.3184 and 1.3123.

The material has been provided by InstaForex Company - www.instaforex.com
GBP / USD. March 20. The trading system. "Regression Channels". The key events of the day: inflation in the UK and the Fed