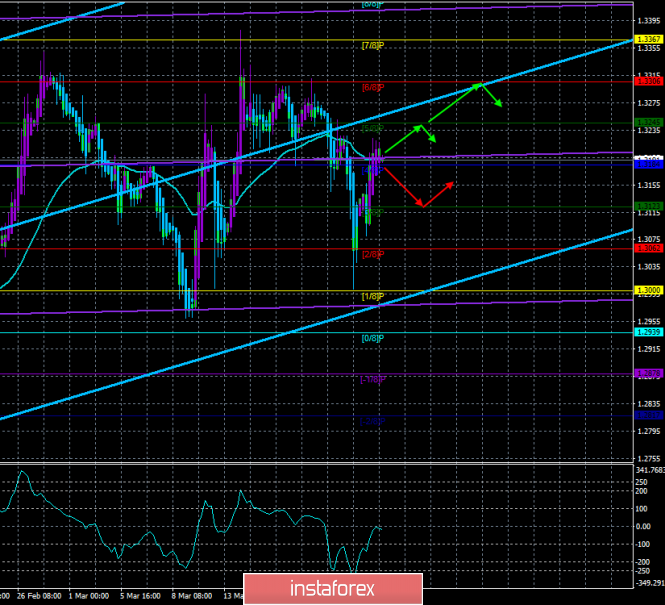 The GBP / USD currency pair has adjusted to a moving average line, which enables the strengthening of the British pound sterling. In general, the pound sterling continues to throw from side to side. Illogical and difficult to predict jerks often occur. Now, in fundamental terms, something more or less likely it is to assume that it goes to be extremely difficult. There is a huge amount of news from the UK. About 4 million people signed a petition on the refusal of Brexit on the website of the British Parliament, and in London about 1 million citizens demanded a repeated referendum. According to insider information, the UK government is preparing a conspiracy against Theresa May. She is expected to receive an offer to voluntarily leave her post on March 25, that is, today. If May refuses, the Cabinet will threaten her with massive resignations. Honestly, it is not clear why the parliament refused to accept 2 votes of no confidence in Teresa May earlier. However, what is happening now around the situation with Brexit, except as a "dead end" and "complete chaos" cannot be called. In this situation, the resignation of May again looks very likely. All this is dangerous for the country, first of all, by the disordered Brexit. Since there is no reason to assume now that the situation can be resolved. A "tough" Brexit, despite Mark Carney's reassurance, threatens Britain with a financial disaster that the situation can be resolved.

The pair GBP / USD continues the upward correction, but has not yet managed to consolidate above the MA. Thus, short positions remain relevant with targets at 1.3123 and 1.3062 if the pair remains below the moving average.

Long positions will again become relevant not earlier than traders overcoming the moving average line. In this case, the bulls will again seize the initiative on the market, and the first targets for the longs will be the levels of 1.3245 and 1.3306.

In addition to the technical picture, the fundamental data and the time of their release should also be taken into account.

Heiken Ashi is an indicator that are colored bars in blue or purple.