GBP / USD. March 5. The trading system. "Regression Channels". There is no news about Brexit, the pound is falling again 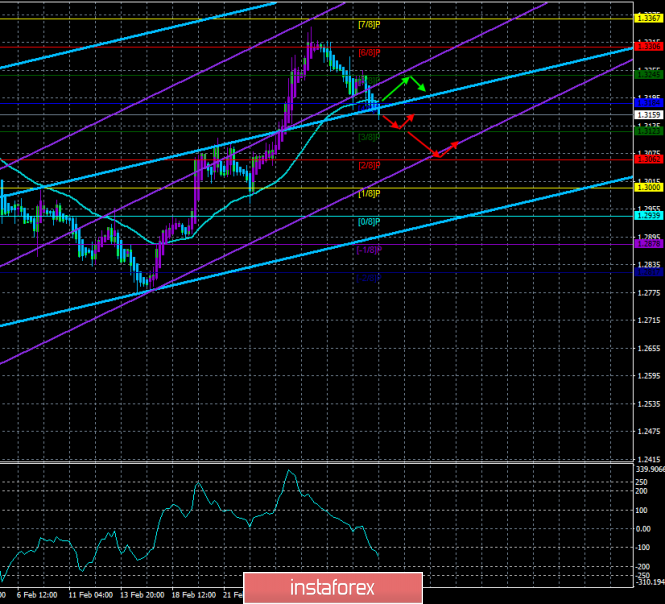 The GBP / USD currency pair continues its not too strong downward movement and broke the moving on March 5th. There is no new data on the subject of Brexit at the moment, but it seems that the entire growth potential of the British pound has been exhausted around the level of 1.3306. Of course, if we receive news of the signing of the "deal" on Brexit tomorrow, then the pound will most likely resume its upward movement, but so far such a scenario is unlikely. For example, the Deputy Foreign Minister of Poland Konrad Szymanski believes that the likelihood of a British exit from the EU without agreements is now as high as ever. But, according to him, the European side is doing everything possible to avoid such a scenario. We still believe that there are no weighty reasons and prerequisites for signing an agreement in the near future. In the same way as there is no reason to expect the British Parliament to endorse Theresa May's plan. Thus, now the pound sterling can again return to annual lows. From a technical point of view, the overcoming of the MA has reversed the downward trend in the instrument. There are no signs of completion of the downward movement at the moment. Tonight in the UK, there will be a speech by the head of the Bank of England, Mark Carney. By tradition, we expect from him a new portion of concerns about the "hard" Brexit.

The pair GBP / USD began to move down. Thus, today, short positions with targets at levels of 1.3123 and 1.3062 are recommended. The bears are now taking the initiative, and the evening performance of Carney may put additional pressure on the pound.

Buy positions are recommended to be opened in case of traders fix the pair back above the moving. In this case, the targets for buy orders will be the levels of 1.3245 and 1.3306.

The material has been provided by InstaForex Company - www.instaforex.com
GBP / USD. March 5. The trading system. "Regression Channels". There is no news about Brexit the pound is falling again