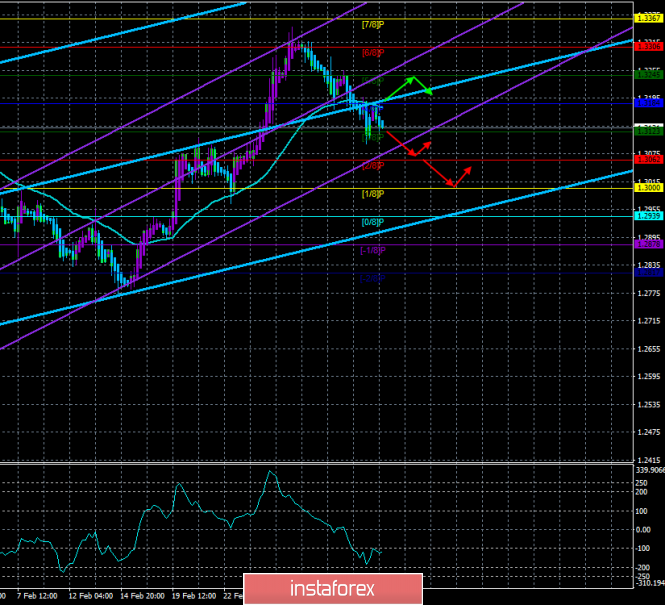 The GBP / USD currency pair has overcome the moving, but cannot yet develop the downward movement. Nevertheless, the continuation of the downward movement is now seen as the most likely option. Meanwhile, the Scottish and Wales parliaments opposed the current agreement between Britain and the EU. Such synchronization in the actions of parliaments clearly shows the attitude of these countries to Theresa May's policies, the current government. At the same time, the moment is approaching when the parliament will have to vote for the current version of the agreement with the EU, for the "hard" version of Brexit and for postponement of the withdrawal from the European Union. These ballots should take place on March 12, 13, 14. Thus, less than a week remains until the next Day X. "Next", because there were already several moments when the fate of Great Britain had to be resolved and disappear, and everything remained in its original position. Thus, in a week, the parliament can simply vote for the Brexit transfer and block the first two votes. Both the pound and the UK will remain in limbo for at least another 2 months. From a technical point of view, we expect the pair to continue to decline, as there is still no fundamental support from the pound sterling.

The pair GBP / USD began to move down. Thus, today, short positions are recommended with targets at Murray levels of 1.3123 and 1.3062. The downward trend persists in the instrument.

Buy positions are recommended to be opened in case of traders fix the pair back above the moving. In this case, the targets for long positions will be the levels of 1.3245 and 1.3306.

The material has been provided by InstaForex Company - www.instaforex.com
GBP / USD. March 6. The trading system. "Regression Channels". Scotland and Wales against the current Brexit agreement