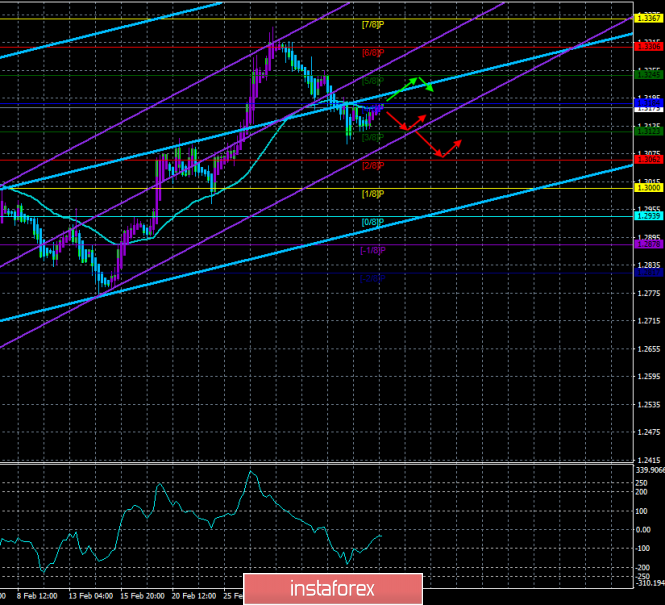 The GBP / USD currency pair has returned to the moving average and is threatening to overcome it, changing the tendency of the instrument to ascending again. What caused the new turn of demand for the British pound is hard to say. Most likely, the old trend for the pound, which rises in price last year on positive market expectations and rumors, is working. Unfortunately, in most cases, the rumors are not confirmed, and positive expectations are not met. But if there were no such groundless corrections, then the pound would be worth less than one dollar. There is still no positive news about the Brexit process. The European Commission acknowledged that the recent negotiations with London ended in nothing, the parties failed to come to new agreements. This is despite the fact that Jean-Claude Juncker and other EU leaders have repeatedly stated that they will not hold new negotiations with the UK. But in any case, there is no agreement, which means that Brexit must be transferred to a later date. Theresa May does not like this option, but it seems that she already understands that this is a dead end. What will delay the Brexit? Only additional time for negotiations, in which neither side wants to make concessions. Thus, it is not yet clear why a postponement is needed at all? From a technical point of view, the pound still remains below the MA, and therefore the downward trend continues.

The pair GBP / USD has adjusted to the moving average. Thus, today it is recommended to wait for the completion of this correction and resume short positions with targets at 1.3123 and 1.3062 if the pair remains below the moving average.

Buy positions are recommended to be opened in case the pair manages to consolidate above the moving average. In this case, the tendency for the instrument to change to ascending again will be actual longs with targets at 1.3245 and 1.3306.