GBP / USD. March 8. The trading system. "Regression Channels". The UK may remain in the EU 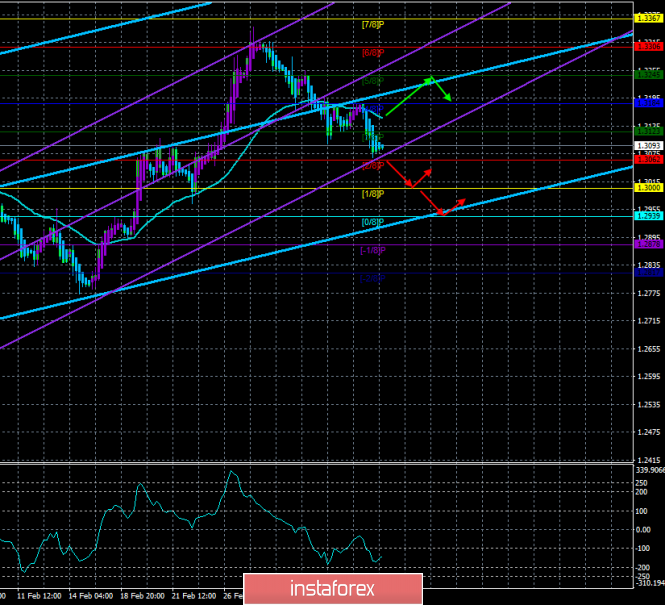 The GBP / USD currency pair resumed the downward movement, failing to overcome the moving average line. Thus, this time, the movement of the pair was logical in terms of the fundamental component. As we have repeatedly noted, there is no compelling reason to strengthen the British currency. Nevertheless, a pound from time to time shows growth based on rumors and expectations. Then, when these rumors and expectations are not met, the pound decline is resumed. New posts on Brexit over the past day were not available to traders. Thus, the last important information remains the ultimatum of the EU to the UK, which is expressed in the fact that over the next 48 hours (less) London must provide a plan to overcome the current stalemate in the negotiations. Such an interpretation causes smiles among traders, since Brussels offers London 48 hours to find a solution that it could not find earlier in several months. Moreover, for some reason, it is London that should search, and not both sides. In general, we still believe that Brussels does not want to let Britain out of the alliance and, perhaps, still hopes that if it is not compliant in the negotiations, the "hard" Brexit option will scare the British parliament and Brexit will not happen at all. We would not exclude such an option, and moreover, it now looks the most likely.

The pair GBP / USD resumed its downward movement. Thus, short positions with targets at 1.3062 and 1.3000 are now relevant before the start of a new round of correction, which Heikin Ashi will signal with purple bars.

Buy orders are recommended to open in case the pair manages to gain a foothold above the moving average. In this case, the tendency for the instrument to change again is upward and the long positions with targets at 1.3245 and 1.3306 will become relevant.

The material has been provided by InstaForex Company - www.instaforex.com
GBP / USD. March 8. The trading system. "Regression Channels". The UK may remain in the EU