GBP / USD: plan for the European session on March 5. Further movement of the pound will depend on the data on the service

To open long positions on GBP / USD you need:

Pound buyers can take advantage of data on the service sector, and in the case of good performance, the formation of a false breakdown around 1.3144 will be a signal to open long positions, which will lead to an update of the maximum of 1.3195 and 1.3248, where I recommend fixing the profits. Under the scenario of further euro decline, it is best to consider new long positions after updating the lows of 1.3093 and 1.3041.

To open short positions on GBP / USD you need:

Sellers will wait for a weak report on the service sector and breakthrough support 1.3144, which will lead to the formation of a new wave of sales of the British pound in order to update the minima near 1.3093 and 1.3041, where I recommend fixing the profits. While there is no news on Brexit, the pressure on the pound will remain, and in the case of an upward correction, short positions can be searched when the highs of 1.3195 and 1.3248 are updated.

Trade is conducted below the 30-day and 50-day moving, indicating a downward correction.

A break of the lower limit of the Bollinger Bands indicator near 1.3144 will lead to a new wave of pound decline. 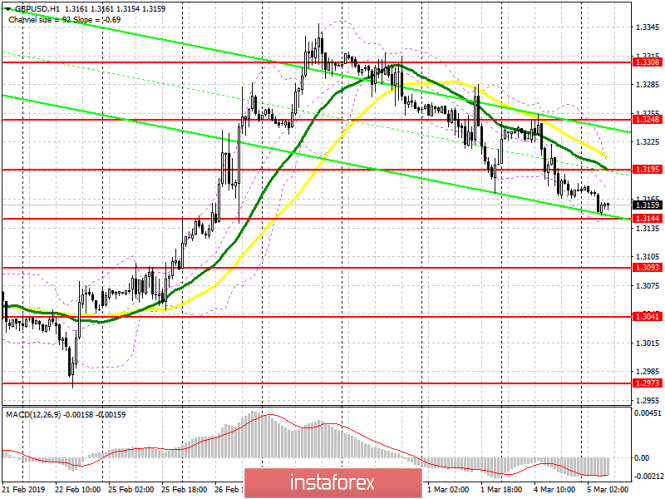 The material has been provided by InstaForex Company - www.instaforex.com
GBP / USD: plan for the European session on March 5. Further movement of the pound will depend on the data on the service