GBP / USD. Pound bogged down in a swamp of uncertainty

The pound against the dollar continues to be in the so-called "strong bear legs" after reaching an annual maximum of 1.3348. The factors such as lack of progress on the Brexit issue, the weak macroeconomic data of Britain and the strengthening of the US currency are pushing the pair down, despite some resistance from the buyers.

Of course, such movements need to be treated with some caution. Positive news about the prospects of the "divorce process" can turn the pair to 180 degrees and return the price to the 32nd figure in a matter of hours. Another issue is that traders have somewhat changed their attitude regarding the Brexit news flow. Unconfirmed rumors and comments by politicians no longer shake the market. The situation crystallized to four possible options: a) the parliament agrees to the deal; b) Britain leaves the EU without an agreement; c) transfers the release date; d) starts the process of repeated referendum. At the moment, the most viable scenario is the prolongation of the negotiation process until June or July. This idea was approved in advance by the EU leadership. 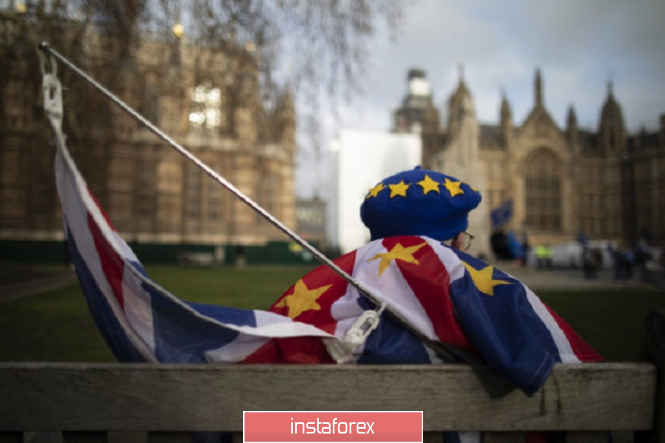 The first reaction of the British currency was extremely positive: a pair of gbp / usd jumped to the middle of the 33rd figure, updating the one and a half year (and, accordingly, the annual) price maximum. However, the euphoria did not last long. Almost immediately, the market realized a fairly obvious fact: the transfer of Brexit does not solve the problem, but only transfers it in time for only a few months. In the meantime, the rhetoric of European politicians remains unchanged: Brussels does not plan to revise the deal and / or provide London with any legal guarantees regarding the back-stop time frame.

In turn, the British parliamentarians reject any other proposed options (for example, the conclusion of a memorandum of a political nature), as they, in fact, do not oblige the EU to any subsequent actions. The situation is still in a dead end, despite the statements of the parties about "constructive negotiations". If we abstract away from such comments, the conclusion suggests itself: the negotiation process regarding the regime of the Irish border is at a zero starting point. It is this fact that forces the British to postpone the date of the country's withdrawal from the EU in order to avoid a "tough" scenario. Nobody is confident about the future prospects of the dialogue: everything will be decided situationally, and quite possibly by the last moment.

In other words, the postponement of Brexit is no longer the "locomotive" of the growth of the British currency. In just a few months, the situation will return to normal. In my opinion, the pound is keeping around 30 figures only for one reason: neither London nor Brussels are interested in the chaotic Brexit, despite the principled positions of the parties. Of course, the ideal option for the pound would be to approve the deal on March 12. However, judging by the rhetoric of the Conservatives and Labor, this scenario is unlikely to materialize.

In general, the news flow regarding the prospects for the March vote has now largely weakened. The information vacuum also puts pressure on the pound, while the incoming data is either veiled and non-specific in nature or thus, indirectly influences the situation.

For example, British journalists recently accused the opposition MPs. But, as it turned out, we are talking about the creation of the Fund, the money from which (about 1.6 billion pounds) will go to support the weak regions of Britain. According to the press, these funds are intended primarily for those regions whose residents supported the country's exit from the EU in a referendum. The government, of course, denied these allegations - because according to them, these funds will be used to create new jobs, and the money will be transferred regardless of the results of voting in parliament. As you can see, this situation is too mediated and twofold in the context of the possible influence on the position of the pound.

Today's speech by the head of the British Foreign Ministry also provided weak support for the pound, primarily because of the "blurring" of the language. He said that London is ready to "show flexibility" as to the form in which guarantees a provided backstop. He also said that "positive signals" are being received from Brussels, which increase the chances for approval of the deal until March 29. We are talking about the signals and parliament conservatives that are ready to show this "flexibility" - Jeremy Hunt did not elaborate on this.

Thus, in the absence of clear and positive news about the prospects for the March vote, or if there are possible compromises between London and Brussels, the gbp / usd pair will continue to slide down to the Bollinger Bands midline on the daily chart (1.3020). But if the "light at the end of the tunnel" still appears (for example, if the Europeans unexpectedly agree to discuss the issue of providing legal guarantees), then the pair will catch up in a matter of hours lost positions with a view to reaching the annual maximum at 1.3348.

The material has been provided by InstaForex Company - www.instaforex.com
GBP / USD. Pound bogged down in a swamp of uncertainty