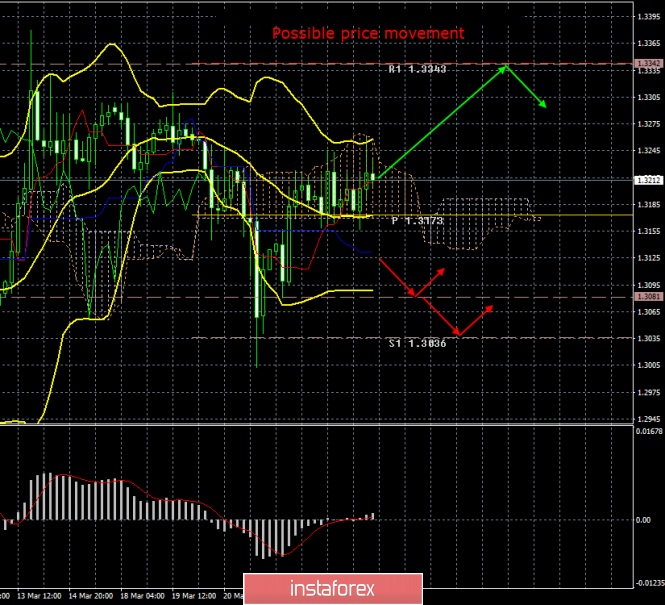 The British pound sterling is trading in different directions during the second trading day of the week, without a definite trend, and moreover inside the Ichimoku cloud. Total confusion is present not only in the British Parliament, but also on the GBP/USD pair. Yesterday, it became known that three more high-ranking officials had resigned as part of a protest against the policy of Theresa May. Recall that earlier, several ministers had already submitted their resignation. The Brexit process itself is in complete impasse. Hope for a favorable outcome rests not with Theresa May, but with the parliament, which tomorrow will hold a series of votes on all sorts of options for leaving the country from the EU, including the rejection of Brexit. The most interesting thing that may well be a situation where none of the options will not be approved by the majority. It is difficult to say whether there were similar cases in world history. What will happen in this case is even harder to say than to assume whether Brexit will take place now, almost three years after the referendum, after almost three years of negotiations with the EU. Technical factors are now frankly secondary. Firstly, because any news could potentially send a pound in one direction or another for 100-200 points, despite the technical picture, and secondly, because of the nature of the pair's movement, the technique now looks not very "beautiful." The pound is still frankly lucky that, given the entire fundamental background, it still does not trade below 1.2500.

The GBP/USD currency pair is now in a difficult situation with the absence of any tendency substantiated by anything. Perhaps tomorrow will shed light on at least the near future of Britain and the fate of Brexit, which, in turn, will allow the pair to breathe more freely.

Redline and histogram with white bars in the indicator window.

The material has been provided by InstaForex Company - www.instaforex.com
GBP/USD. March 26. Results of the day. Three more resignations in the British Parliament. Total chaos