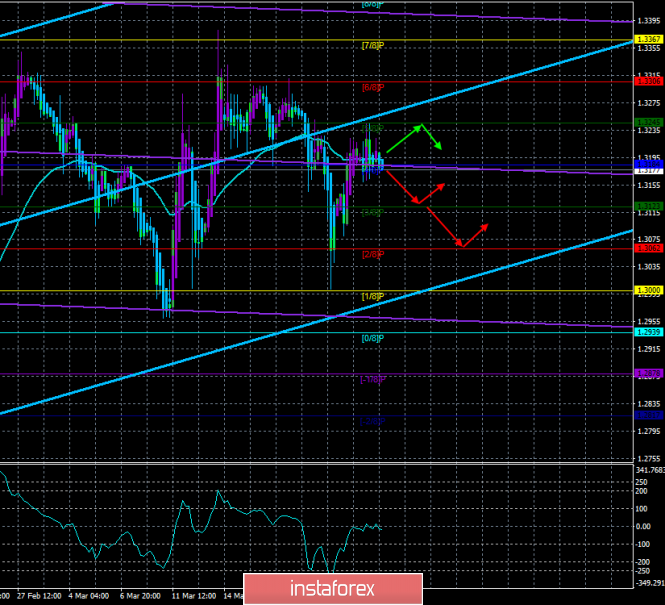 The GBP / USD currency pair continues to trade along the moving average line. Meanwhile, the British parliament realized that Theresa May could not offer anything new except for her Brexit plan, and her only strategy was to threaten the government with a "tough" version of Brexit and took control of the situation. A member of the Conservative Party, Oliver Letwin, put to the vote an amendment that allows the parliament on March 27 to vote for absolutely any Brexit options, and this amendment was adopted by a majority of parliamentarians. Thus, on March 27, bypassing Theresa May, the parliament will vote for all sorts of scenarios of leaving the EU, including a repeated referendum and a refusal to leave the European Union. It is difficult to say whether this is good news, but it is definitely a shift from the "dead" place where the country was led by the prime minister. Thus, tomorrow during the day we will be able to find out what the British Parliament wants, which rejected the options of "tough" Brexit and Brexit according to the "Checkers" plan. Theresa May's reaction to this event has not yet happened, but for some reason, it seems that her political career will result in the failure to accept the Brexit agreement and the subsequent resignation by agreement. Tomorrow's trading can be distinguished by high volatility and tool jerks from side to side.

The pair GBP / USD continues the upward correction. In the coming days, the pair may again "storm", so with the opening of any position, it is recommended to be careful. News from the UK can have a strong impact on the currency pair.