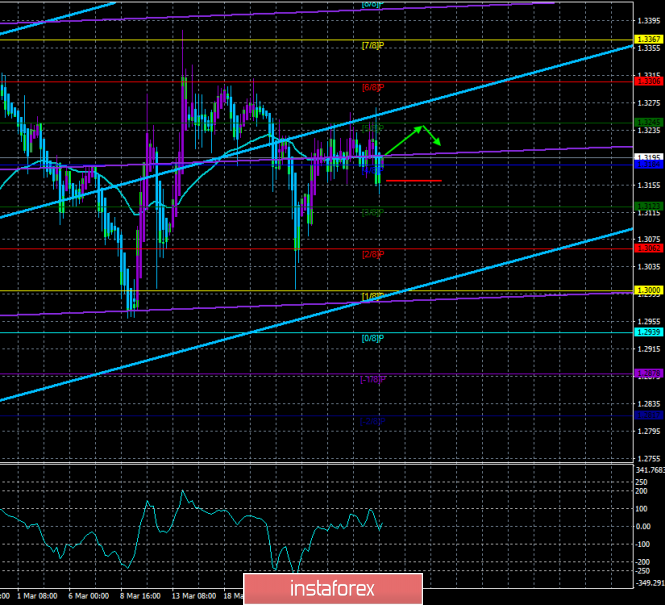 Yesterday, the currency pair GBP/USD had every chance to jerk in one of the parties. For the pound sterling, Wednesday was another day X, which, as usual, ended with decisions that did not clarify the situation too much. All variants of Brexit, and there were as many as 8, including a repeated referendum, the refusal to leave the EU, the format of "Norway +", the "hard" scenario. All this led to the fact that the Parliamentarians decided to postpone the Brexit deadlines at the legislative level. And the only and best option for Britain to leave the EU now is an agreement proposed by Theresa May and rejected by Parliament 2 times. Honestly, it is difficult to even imagine what the UK is waiting for even in the next few months. If May does not accept the "deal", the country will leave the EU on the "hard" scenario on April 12. That is, in two weeks. As the yesterday's vote showed, the unordered Brexit is not needed by Britain. The transfer of Brexit on May 23? Then parliament must approve the May agreement. In general, the voting in parliament passed once again, but there was no more clarity. The pound sterling yesterday added a bit to volatility, but it remains in one place, since there is no less uncertainty. No major macroeconomic publications are scheduled for Thursday in the UK.

The pair GBP/USD continues to trade around the MA, in a frank flat. Thus, we recommend waiting for the completion of this flat and only after that resume trading. Unfortunately, yesterday's meeting of the British Parliament did not make the whole Brexit process even a little clearer, as were its prospects.

The material has been provided by InstaForex Company - www.instaforex.com
GBP/USD. March 28. The trading system. "Regression Channels". The British Parliament rejected all alternatives to Brexit.