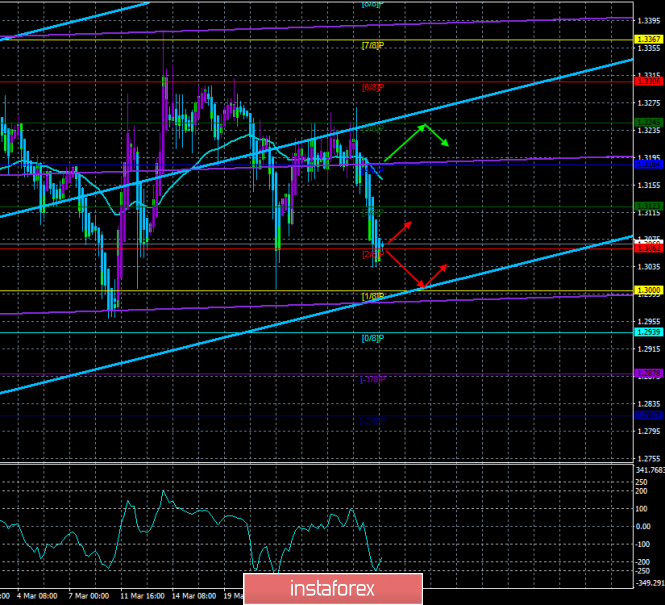 The GBP/USD currency pair abruptly resumed the downward movement yesterday after several days of stomping in one place. Yesterday evening, there was information that today will be the third vote on the draft "deal" by Theresa May with the EU. As stated by the Speaker of the British Parliament, the only chance to postpone Brexit is the adoption of an agreement reached by Theresa May. Thus, either today the Parliament accepts the "deal" with Brussels and then Brexit will be held on May 22, or rejects it and then the UK will withdraw from the EU on April 12 according to the "hard" scenario. Today is becoming the next day X for the UK and the British pound. Whatever the decision of the parliament, it will be taken late in the evening, so the markets simply will not have time to react to it. Thus, trading on Monday can be very volatile, and the pair can open to either side with a large gap. This point should be taken into account when opening any positions today and holding them for the weekend. Also today in the UK, a report on GDP for the fourth quarter will be published. Experts predict an increase of 1.3% y / y and 0.2% q / q. Any value below forecasts will create additional pressure on the British pound.

The pair GBP/USD sharply resumed its downward movement. Since today another vote for the "deal" on Brexit will take place in Parliament, today and on Monday the volatility can be high, and the predictability of movements is extremely low. Therefore, we once again recommend extremely cautious trading during the day without transferring deals to Monday.