GBP/USD: plan for the European session on March 12. Theresa May has a "trump card up her sleeve"

The pound rose sharply yesterday after Theresa May's unplanned meeting with Juncker was announced. At this meeting, a number of new conditions were reached in the Brexit agreement, which will be represented today in Parliament at the vote, which is also expected by many to help reach an agreement. Pound purchases are best considered after a downward correction from support levels of 1.3175 and 1.3126. A breakthrough with a consolidation above 1.3219 will also be a signal to buy with a target of 1.3262 and 1.3313.

Today, the bears have to rely on weak data on UK GDP, which can form a false breakdown in the resistance area of 1.3219, which will lead to selling of the pound to the support area of 1.3175 and 1.3126, where I recommend taking profits. In case the pound increases above 1.3219 in the first half of the day, you can take a closer look at short positions against the resistance of 1.3262 and 1.3313.

Moving Averages: Trading is carried out above the 30-day and 50-day moving averages, which indicates the formation of a bullish trend.

In case the pound decreases, support will be provided by the average Bollinger Bands indicator around 1.3175. The upward correction will be limited to the upper limit around 1.3285, from where you can consider selling the pound 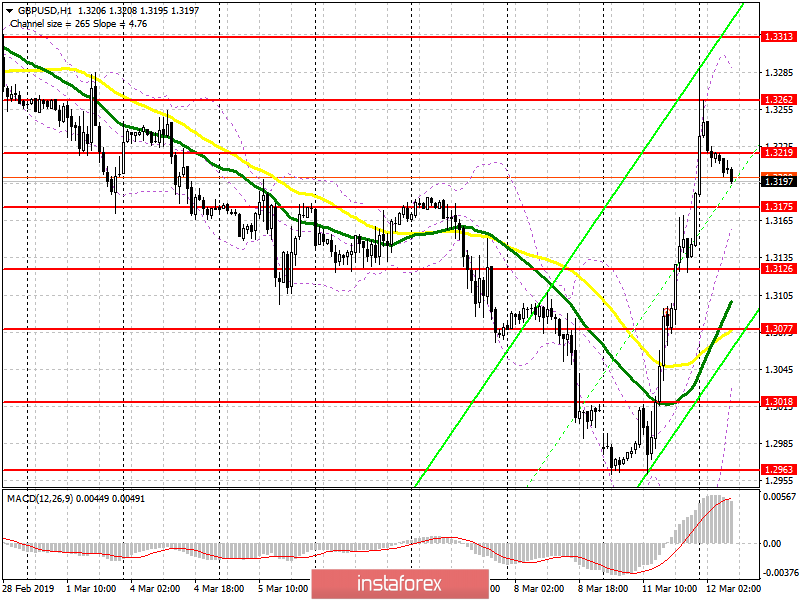 The material has been provided by InstaForex Company - www.instaforex.com
GBP/USD: plan for the European session on March 12. Theresa May has a "trump card up her sleeve"