GBP/USD: plan for the European session on March 8. The pound continues to follow a trend

The breakthrough of the next lower limit of the short-term side channel retained the downward trend in the British pound. Currently, buyers have the task of returning and consolidating above the resistance of 1.3117, which will lead to a larger upward correction to the area of resistance at 1.3179, where the upper limit of the downward channel passes. In case the GBP/USD further declines, long positions can be considered on a false breakdown around 1.3049 or buy the pound to rebound from a new low of 1.2973.

While trade will be conducted below the resistance of 1.3117, where the moving averages will pass, the pressure on the pound will continue. The formation of a false breakout in that area in the first half of the day will be a direct signal to sell the GBP/USD based on a test of a low of 1.3049 and an update of support at 1.2973, where I recommend taking profits. In case of growth above 1.3117, you can sell immediately to rebound from a high of 1.3179.

Trade is conducted below the 30-day and 50-day moving, which maintains the downward trend in the pound.

In case the pound decreases, support will be provided by the lower limit of the Bollinger Bands indicator around 1.3049. The upward correction will be limited to the upper limit around 1.3135, from where you can see selling of the pound. 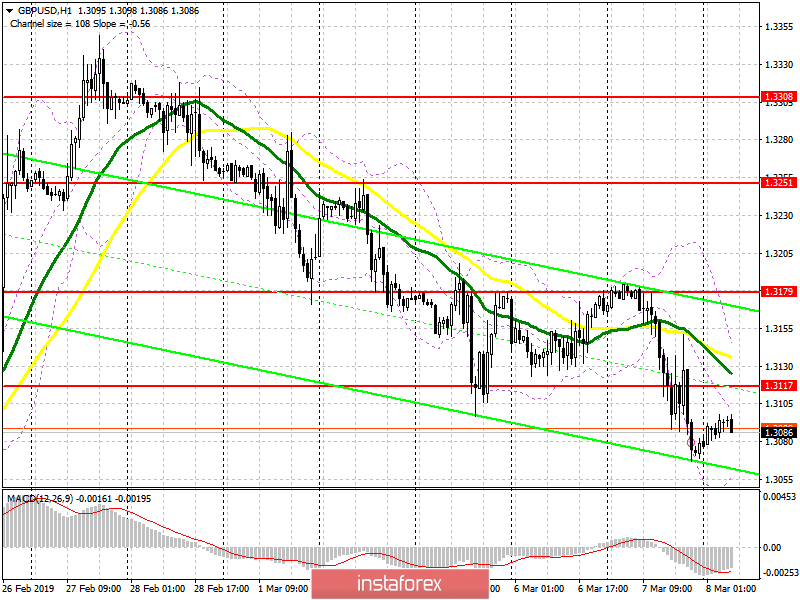 The material has been provided by InstaForex Company - www.instaforex.com
GBP/USD: plan for the European session on March 8. The pound continues to follow a trend