Gold is waiting for the verdict of the Fed

The best start of the American stock market since 1991 and unwilling to break the "bullish" trend provoked the USD index to a 3% gold correction. Investors began to doubt that the 14% rally from August lows levels could continue. Its key drivers were concerns about the slowdown of the global economy under the influence of trade wars and the low rates of the global debt market. If the States and China agree, and the global GDP, headed by the Celestial Empire, goes to a V-shaped recovery, the precious metal will have a hard time. However, other trumps can play on his side.

Goldman Sachs believes that different sectors of the American and world economy will lead to a weakening of the US dollar, which will allow the bulls to restore the uptrend by XAU / USD. A leading indicator from the Atlanta Federal Reserve Bank indicates a decline in US GDP growth to less than 1% in the first quarter. At the same time, investors believe that the eurozone has reached the bottom, and large-scale fiscal and monetary stimulus will help China. The situation abroad begins to look better than in the States, which, as a rule, leads to a weakening of the USD index.

Enough exchange funds react sensitively to the change of the gold market conjuncture. Their reserves have declined since the beginning of the year from 73.3 million to 71.8 million ounces. At the same time, the sluggish dynamics of the European economy and the negative rates of the German debt market contribute to the high demand for ETF products from the Old World. It has been increasing for three years in a row, and, most likely, will continue to do so. This circumstance allows us to count on the recovery of the uptrend on XAU / USD. 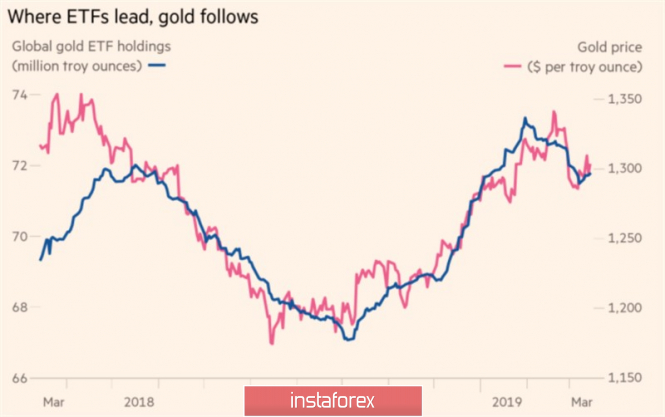 Structure and dynamics of demand for ETF products 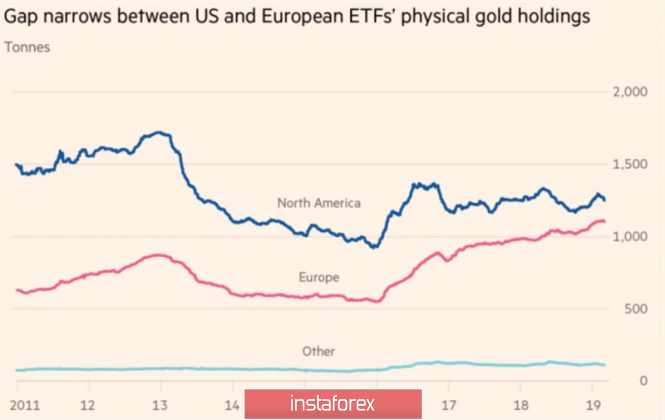 If we proceed from the assumption that the economy of the Middle Kingdom will not be restored V, but U-shaped and the US stock market will soon change fear, then the medium-term outlook for the precious metal looks optimistic. Moreover, the rates of the global debt market amid slower GDP growth and inflation are more likely to remain at historically low levels, and the completion of the Fed's monetary policy normalization cycle will help the dollar to weaken.

In the short term, the fate of the precious metal will be determined by Jerome Powell and the company. Fed concerns about the state of the US and world economy, lower FOMC forecasts for the federal funds rate and GDP are the "bearish" factors for the US dollar. On the other hand, the dovish rhetoric of the Fed chairman will support US stocks, improve global risk appetite, and continue to put pressure on safe-haven assets. Gold risks falling into consolidation in anticipation of new drivers capable of leading it from this state.

Technically, the correction to the CD wave continues as part of the transformation of the "Shark" pattern at 5-0. Rebound from the levels of $ 1307 and $ 1315 per ounce will allow the "bears" to continue the attack. To restore the "bullish" trend, confident assaults of resistances at $ 1333 and $ 1340 are required.

The material has been provided by InstaForex Company - www.instaforex.com
Gold is waiting for the verdict of the Fed