Intraday technical levels and trading recommendations for GBP/USD for March 5, 2019 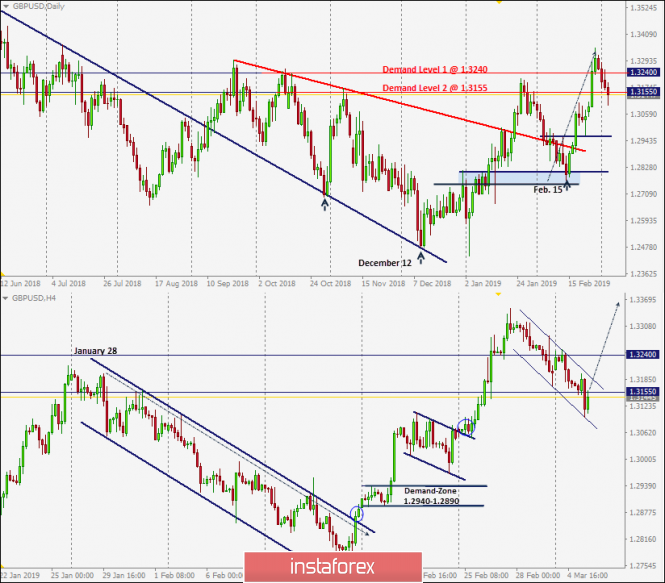 Since then, the current bullish swing has been taking place until January 28 when the GBP/USD pair lost its bullish persistence above 1.3155. Hence, the short-term scenario turned bearish towards 1.2920 then 1.2820-1.2800 within the depicted H4 bearish channel.

On February 15, significant bullish recovery was demonstrated around 1.2800-1.2820 resulting in the current bullish breakout above the depicted H4 bearish channel. Quick bullish movement was demonstrated towards 1.3155, 1.3240 and 1.3300.

Early signs of bearish reversal/retracement were demonstrated around the price level of 1.3317. Bearish pullback was expected to extend down towards 1.3150 and 1.3100 where the lower limit of the current Flag/channel pattern is located.

Bullish persistence above the newly-established depicted demand-level (1.3150) is mandatory to allow further bullish advancement towards 1.3240 initially.

On the other hand, any bearish breakdown below 1.3150 then 1.3100 invalidates the short-term bullish scenario allowing a quick bearish movement to occur towards 1.3060 where the recent bullish breakout was initiated.

The material has been provided by InstaForex Company - www.instaforex.com
2019 Intraday technical levels and trading recommendations for GBP/USD for March 5