March 15, 2019: EUR.USD approaching the upper limit of its trend channel 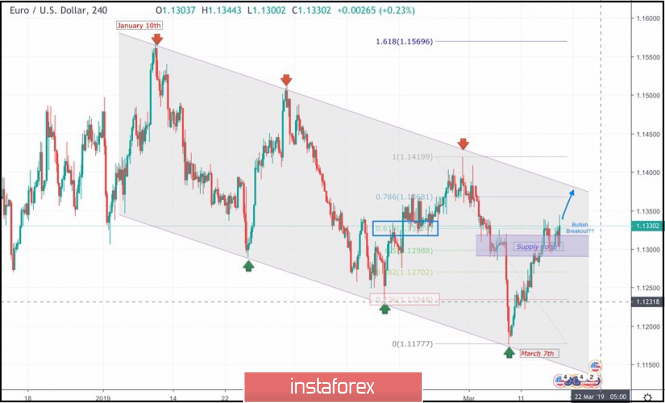 Bullish fixation above 1.1430 was needed to enhance a further bullish movement towards 1.1520.

Bullish persistence above 1.1270 (Fibonacci 38.2%) enhanced a further bullish advance towards 1.1290-1.1315 (the depicted supply zone) where lack of significant bearish pressure was demonstrated.

Earlier this week, previous negative fundamental data from US could push the EUR/USD pair for a temporary bullish breakout above 1.1315 which was followed by a period of indecision/hesitation.

Today, another bullish breakout attempt is being executed above 1.1327 (61.8% Fibonacci level).

This probably enhance further bullish movement towards 1.1370 and 1.1390 where the upper limit of the depicted movement channel is located.

On the other hand, a bearish breakout below the price level of 1.1270 (38.2% Fibonacci) will probably liberate a quick retracement towards 1.1160 again where the lower limit of the movement channel can be tested again.

The material has been provided by InstaForex Company - www.instaforex.com
2019: EUR.USD approaching the upper limit of its trend channel March 15