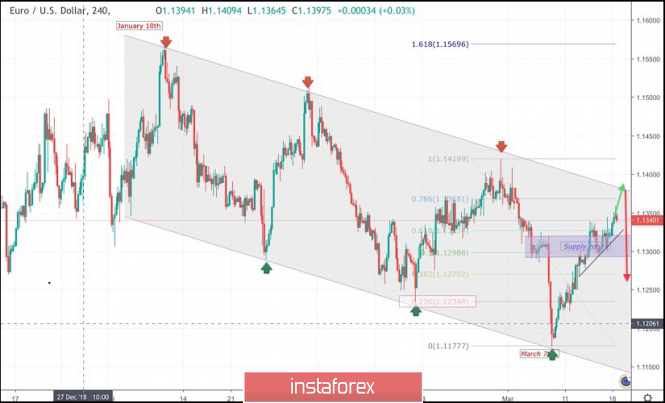 Bullish fixation above 1.1430 was needed to enhance a further bullish movement towards 1.1520.

This week, another bullish breakout attempt is being executed above 1.1327 (61.8% Fibonacci level).

This probably enhance a further bullish movement towards 1.1370 and 1.1390 where the upper limit of the depicted movement channel is located.

On the other hand, bearish breakout below the price level of 1.1270 (38.2% Fibonacci) will probably liberate a quick bearish retraction towards 1.1160 again where the lower limit of the movement channel can be tested again.

Conservative traders should wait for the current bullish pullback to pursue towards 1.1390-1.1400 for a valid SELL signal.

The material has been provided by InstaForex Company - www.instaforex.com
2019 : EUR/USD Bearish opportunity around upper border of trend channel. March 18