Brent futures quotes wandered near four-month highs and there are more and more conversations in the market that black gold is returning to the tug-of-war between OPEC and American manufacturers. While the cartel and other countries, including Russia, are working to stabilize the situation by reducing production, companies from the United States, on the contrary, are increasing it. As a result, the importance of global demand for pricing increases significantly.

According to the International Energy Agency, the United States will double its gross crude oil exports to 4.2 million b/d by 2024. The total supply of oil and oil products abroad will reach 9 million b/d. over the next five years, the share of U.S. production of oil will account for 70% of the growth of the global figure. We are talking about increasing production from 11 million b/d in 2018 to 13.7 million b/d in 2024. All this allows the IEA to talk about the second wave of shale mining. I doubt that such a rapid growth would have been possible if the prices for the North Sea variety were $40-50 per barrel. BofA Merrill Lynch expects to see the average cost of Brent in 2019 at $70, WTI - at $59 per barrel.

According to OPEC Secretary General Mohammed Barkindo, the cartel untied the hands of American manufacturers. Judging by the statements of Riyadh - it continues to do so. Saudi Arabia intends to reduce exports to 7 million b/d and production below the psychologically important mark of 10 million b/d. In February, the last figure was 10.11 million b/d. External demand for oil supplies from the Saudis is estimated at 7.6 million b/d. The intention of the largest member of OPEC to over-fulfill its obligations under the contract to reduce production by 1.2 million b/d in order to stabilize the market situation is a bullish factor for Brent and WTI. 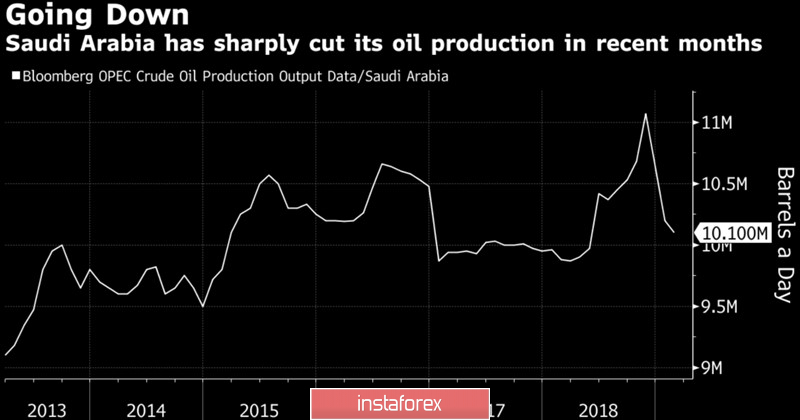 Support for "bulls" of oil is provided by power outages in Venezuela, which aggravates the situation with the fall in oil production, as well as progress in relations between the US and China, as well as Britain and the EU. According to the International Energy Agency, the erratic Brexit and the associated recession of the UK economy will increase uncertainty and slow global demand. The IEA believes that it will increase by about 1.2 million b/d per year until 2024, which is equivalent to +1.2%. The news that Brussels is ready to accept changes and additions to the draft treaty with London reduced the risk of chaos and allowed Brent to return to the area of high marks from mid-November.

A serious obstacle to bulls on the North Sea variety could be the correction of US stock indices, which will indicate a deterioration in global demand for risk and a potential drop in demand for black gold. The probability of a pullback of the S&P 500 is increasing, which limits the potential of the Brent rally. Technically, after reaching the level of $68.4 per barrel (50% of the CD wave of the Shark pattern), against the background of the inability of buyers to push quotes higher, the risks of falling prices will increase.

The material has been provided by InstaForex Company - www.instaforex.com
Oil exceeds the plan