After a long winter rally, oil decided to take a breath, which resulted in the consolidation of Brent in the trading range of $ 64.3-67.8 per barrel. Investors evaluate the prospects for black gold in the context of a set of multidirectional drivers, including the volume of OPEC and US production, changes in global demand and the dynamics of reserves. "Bulls" are confident that while positive news will be received from the negotiating tables of Washington and Beijing, the relevance of purchases will not disappear anywhere. "Bears", by contrast, indicate the presence of an oil market surplus in 2018 and the finding of global commercial reserves above their five-year average. While opponents are discarding their trump cards, black gold continues to consolidate.

According to estimates from Bloomberg experts, OPEC reduced production to 30.5 million b / d in February (-56 thousand b / s m / m). Reuters calls the figure of 30.68 million b / s. According to the Minister of Energy of the Russian Federation Alexander Novak, in March, Russia will be more fulfilling its obligations to reduce production than before. The process of reaching the promised amount of -228 thousand b / s will go faster, which should be regarded as a "bullish" factor for Brent and WTI. On the other hand, the resumption of mining at problem sites in Libya and the growth of Venezuelan exports are supporting the "bears". The increase in US production is above 12 million b / s in February.

Dynamics of oil production in Libya and Venezuela 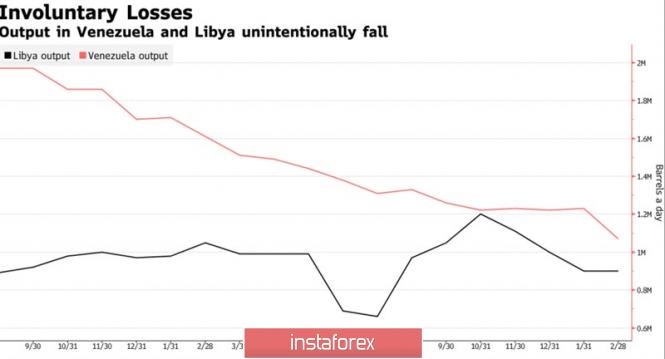 Can we say that the States supply the black gold market exclusively negative, obeying the will of their willingness to see the president of low prices? This is not entirely true. Along with the potential growth of US stocks by 1.05 million barrels in the five-day period by March 1 (if this happens, the figure will increase over five of the last six weeks), a helping hand to customers extends the drop in the number of drilling rigs from Baker Hughes to a 9-month minimum at 843.

The markets react quite differently to news from the Washington and Beijing negotiating tables. According to Goldman Sachs estimates, the States will achieve their goals and at the same time maintain current tariffs on Chinese imports until 2020. This is necessary in order to monitor the fulfillment of the Celestial obligations. The Asian country will increase purchases of American products by $ 10 billion a year, which will lead to a decrease in its foreign trade surplus with the United States.

Oil responded to the decline in Chinese GDP forecasts from the government from 6.5% to 6-6.5% by 2019 drop in prices, but the fact that Beijing is ready to expand the fiscal stimulus from 1.3 trillion to 2 trillion yuan ($ 298.3 billion ), allowed the "bulls" to go to the counter. Celestial is the largest consumer of raw materials, and the improvement in domestic demand should be regarded as positive for black gold.

Technically, on the daily chart of Brent, correction continues as part of the transformation of the Shark pattern to 5-0. It is possible that the current range of consolidation will be expanded to $ 64.1-68.5 per barrel (rollback levels of 38.2% and 50% of the CD wave). 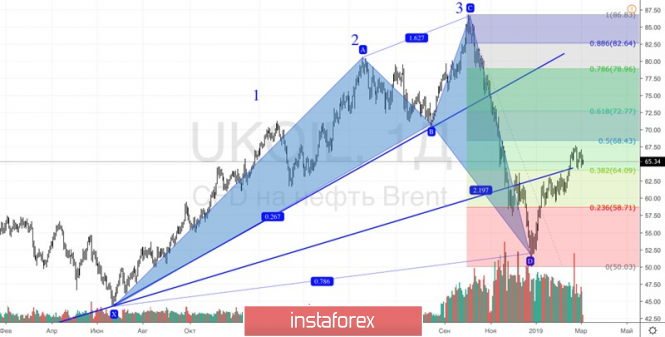 The material has been provided by InstaForex Company - www.instaforex.com
Oil took a breath