Pound will pass the test

This has been issued the best week so far. For the last month, the pound, leading the G10 race, was forced to slow down due to weak statistics on business activity in the manufacturing sector. In February, British companies actively reduced their employees and increased stocks, fearing Brexit's indiscriminate behavior. As a result of which, the purchasing managers index slowed down from 52.6 to 52. This is the weakest indicator over the past four months and its second worst since voting on the country's membership in The EU in the summer of 2016. The economy of Foggy Albion is in a fever, but the sterling who is fixated on improving the political landscape pays little attention to this.

Rumors that Theresa May will propose for the Parliament to extend the Article 50 of the Lisbon Treaty are pulling the GBP / USD up. Investors sincerely hope that this will lead either to a soft Brexit, or to a repeated referendum. The result of the latter could be the preservation by Britain of a place in the European Union. However, public opinion polls show that the balance of power is currently about the same (53% for staying in the EU, 47% against) in the summer of 2016 on the eve of the first vote.

The pound leads for a falling volatility ( a three-month implied indicator fell to its lowest level since mid-autumn) and bullish forecasts of large banks. So, Deutsche Bank believes that the current GBP / USD rally is fully justified. Investors are laying in quotes for a couple waiting for the date of the divorce to be postponed from March 29 to a later period. Goldman Sachs says that there is a closure of positions to hedge the risk of disorderly Brexit. Few people currently believe that the sterling will collapse to $ 1.15. In the worst case, where it leads to to $ 1.24, UBS recommends buying it.

At the same time, it is necessary to understand that now the pound is growing on rumors. However, if parliamentarians prolong Article 50 of the European Union Code, uncertainty will again fall on Britain, which in recent years has led to a decline in business activity and a slowdown in GDP. In this regard, the March 5 release of the services PMI is a risk factor for bulls on GBP / USD. If it were not for the negative from the economy, the pair, according to MUFG, would have already taken off to 1.36-1.37.

PMI Dynamics in Services and GDP in Britain

Support for buyers GBP / USD was provided by the US administration. Donald Trump once again criticized Jerome Powell, calling him a gentleman who likes to raise rates and a strong dollar. According to the president, a strong currency blocks the oxygen for doing business abroad for American companies. Although the markets have rather calmly reacted to verbal interventions, it is rumored that the plans of the owner of the White House will be implemented with other people's help.

Technically, on the daily GBP / USD chart, the implementation of the 5-0 pattern takes place. A rollback to 50% of the CD wave allowed to form longs. And at present, the pair are moving north to the target using the "Wolfe Wave" model. They correspond to marks of 1.35 and 1.39. 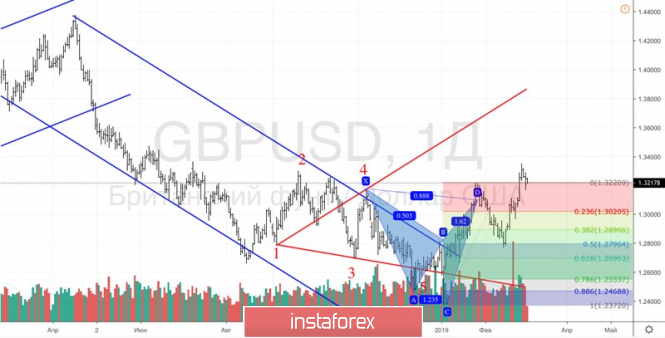 The material has been provided by InstaForex Company - www.instaforex.com
Pound will pass the test